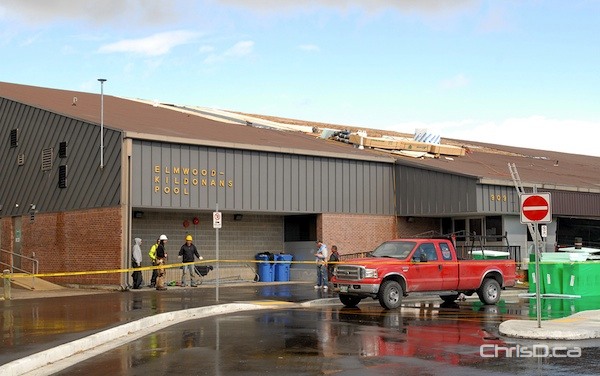 Crews work to repair damage caused to the roof of the Elmwood Kildonans Pool in this file photo. (STAN MILOSEVIC / CHRISD.CA)

Spring programming at Elmwood Kildonans Pool won’t be offered this year due to ongoing repairs at the facility.

An electrical fire originally closed the pool last May, but cracks were later detected along the pool tank walls while engineers were carrying out an inspection. The city says a portion of the plaster between the pool tiles and concrete tank walls has separated from the tank.

It’s not known when the pool at 909 Concordia Avenue will reopen, but the contractor has extended work shifts to expedite the process.

An enhanced schedule and additional programming will continue to be offered at Transcona Centennial Pool until the end of the spring session.