Counting Down to the 46th Annual Festival du Voyageur 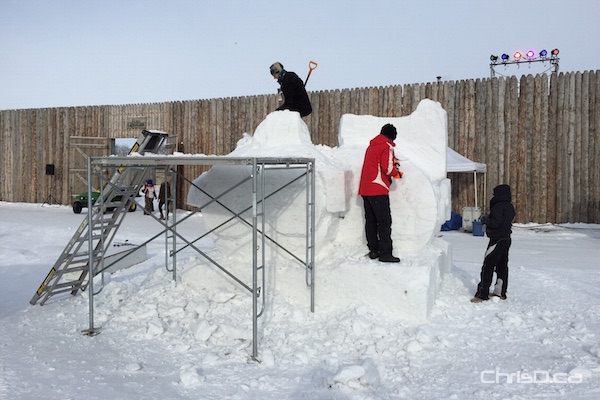 Snow sculptors work on their masterpieces in Voyageur Park on Thursday, February 12, 2015. (CHRISD.CA)

WINNIPEG — The finishing touches and final preparations are being made at Voyageur Park in St. Boniface ahead of the 46th annual Festival du Voyageur.

It’s all hands on deck before the annual French-Canadian festival opens to the public on Friday, including with sculptors in the international snow-sculpting symposium.

Wielding the sharpest snow-carving tools of the trade, the symposium attracts sculptors from around the world, including from as far away as the Netherlands, Estonia and Germany.

Besides the giant frozen visual art pieces, the largest outdoor winter festival in western Canada will offer a full range of fun things to do over its 10-day span. 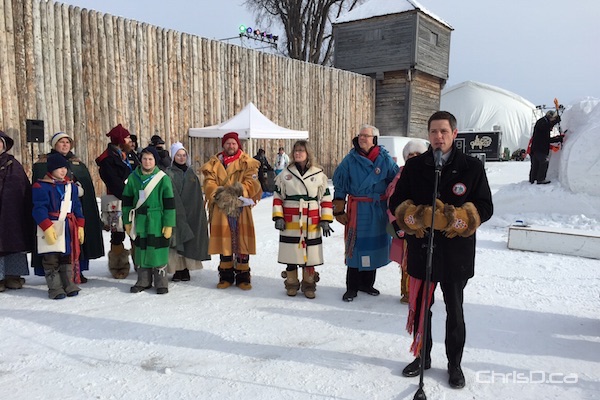 Mayor Brian Bowman and other dignitaries speak during the media launch to the 46th annual Festival du Voyageur on Thursday morning. (CHRISD.CA)

“We have a lot of new activities this year for the whole family,” said Irina Ivanov Bissonnette, director of marketing and communications. “We have new workshops for the kids happening in the kids’ tent, we also are opening Fort Gibraltar at night — called Bar Gibraltar — there will be fire jugglers, fire pits, DJs… so really a whole new atmosphere.”

This year’s theme is the World’s Largest Kitchen Party, which officially kicks off with the traditional torch light walk Friday evening at the Canadian Museum for Human Rights (6 p.m.) Hundreds of candles and torch lights will lead the walk over to Voyageur Park for the opening ceremony at 7:30 p.m. around a newly-designed firepit, meant to replicate Fort Gibraltar. A fireworks display by Archangel Fireworks will cap off the celebration.

Festival du Voyageur runs from February 13-22. We’ll have a more in-depth preview of what to expect on opening weekend tomorrow morning.