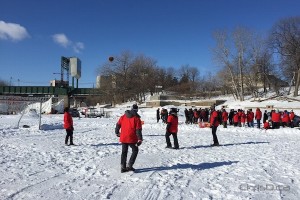 Teams warm up on the Red River ahead of a friendly soccer game on Friday, February 13, 2015. (CHRISD.CA)

WINNIPEG — An unconventional playing surface had a group of dignitaries out for a fun game of soccer on Friday.

In honour of the upcoming FIFA Women’s World Cup Canada 2015, local celebrities and a team of volunteers with Festival du Voyageur squared off in a roughly 15-minute match on the Red River.

“The snow is nice and soft… if you fall down it’s not a problem,” said referee Hector Vergara, executive director of the Manitoba Soccer Association.

A faux fur soccer ball was used in place of the real thing — which given the temperature outside — was a better option in the event someone took a ball to the face. Former mayor Sam Katz was not present.

The public can get a chance to see other soccer games on ice at The Forks from 11 a.m. to 3 p.m. on Monday.

The FIFA Women’s World Cup comes to Winnipeg in June — one of several Canadian cities to host the matches.