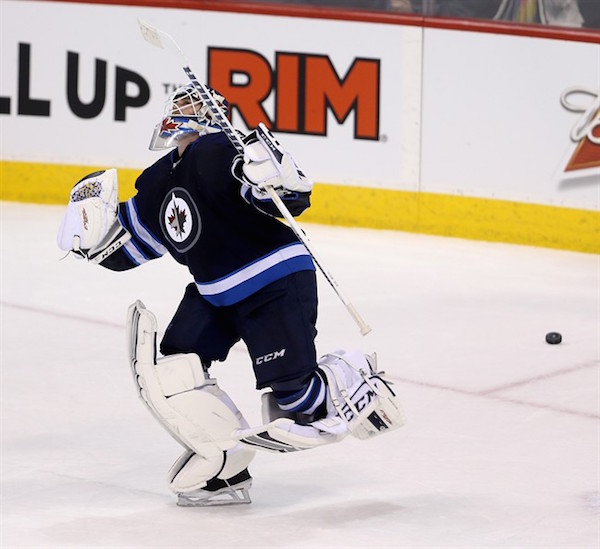 Winnipeg Jets’ goaltender Michael Hutchinson (34) celebrates after stopping the final attempt during the shootout against the Edmonton Oilers’ during NHL hockey action in Winnipeg, Monday, February 16, 2015. (THE CANADIAN PRESS/Trevor Hagan)

WINNIPEG — A see-saw match between the Edmonton Oilers and Winnipeg Jets needed a shootout to solve things Monday night at MTS Centre, with Blake Wheeler finally settling it with the game winner to give the Jets a 5-4 win — their fourth in five games.

Rookie netminder Michael Hutchinson remains perfect in the shootout this season — now 14-for-14 — as he shut the door on all three Oilers shootout attempts for his third-consecutive victory, despite allowing four goals on just 19 shots through regulation time.

While Winnipeg Jets leading goal scorer Bryan Little lit the lamp twice Monday night, so too did Edmonton’s Nail Yakupov, including a go-ahead goal with 4:46 remaining in regulation that appeared to be Yakupov’s namesake in the Jets’ coffin.

But Andrew Ladd was able to equalize just 42-seconds later and send it to overtime.

“It probably went down to the wire more than we wanted it to,” said Ladd, whose critical late goal has him at 20 on the year. “When they got their opportunities they put the puck in the net. We were able to stick with it and keep battling and find a way to get two points, and at the end of the day that’s all that matters.”

The win keeps the Jets (30-19-10) on pace in the Western Conference with 70 points and securely in the top Wild Card spot, albeit with those chasing them — Calgary, Minnesota, Los Angeles, and Dallas all holding games in hand.

Little’s 22nd and 23rd markers of the season both opened the scoring and tied the game 2-2, while he also hit two posts — one in the second period and another during his shootout attempt.

“I was getting a ton of chances. A couple of those posts go my way and it’s a different game,” said Little, who finished with eights shots and an assist in addition to his goals. “I had enough chances to score five. You’re not going to score on all of them.”

The Oilers were able to take 2-1 and 3-2 leads despite only registering 22 total shots on Winnipeg’s Hutchinson, while Winnipeg peppered Edmonton’s Viktor Fasth with 46.

Anton Lander scored on the power play with Andrew Ladd off for hooking to make it 2-1 Edmonton late in the opening frame, then following Little’s equalizer midway through the second young Oilers centreman Ryan Nugent-Hopkins took advantage of a bad Jets line change early in the third, making it 3-2 on the breakaway.

Defenceman Tyler Myers, acquired on Wednesday in a blockbuster deal with the Buffalo Sabres, scored his first goal as a member of the Jets on a point blast early in the third to tie the game once more.

“How hard the guys play the system, it’s not that surprising,” said the six-foot-eight 25-year-old Myers with a chuckle. “I think everyone is on the same page and it’s allowing for each and every guy in the room to get the most — or if not the most, pretty close — out of what they can do. I’m just trying to play as hard as I can and as consistently as I can.”

Two Jets went down with injuries Monday night — Mathieu Perreault left early in the contest with a lower-body injury and was spotted in a walking boot while leaving the arena, and newcomer Drew Stafford left in the third period with an upper-body ailment. Jets head coach Paul Maurice could not provide any update, and the earliest it would be is Wednesday with the team given the day off on Tuesday.

Winnipeg’s quick stop at home for a single game now sees them head out for a pair in Washington and Toronto on Thursday and Saturday night before returning again for four at home.