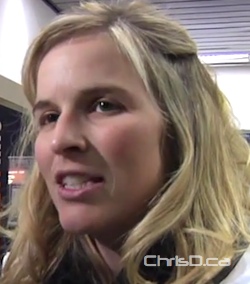 MOOSE JAW, Sask. — Manitoba’s Jennifer Jones was due for a clunker. It finally happened Wednesday morning at the Scotties Tournament of Hearts.

Jones shot just 69 per cent and made some uncharacteristic errors in a 9-6 loss to Nova Scotia’s Mary-Anne Arsenault at Mosaic Place. It was her first defeat of the competition and ended a run of 23 straight round-robin victories at this event.

“They’re all great teams and we weren’t at our best and they played very well today,” Jones said. “A couple of rocks we’d like back but at the end of the day it’s just one loss.”

Arsenault hit a tapback for three points in the eighth end and gave up a deuce in the ninth before holding on for the win.

“We got some breaks,” she said. “We haven’t gotten any breaks at all this week and they all came in one game.”

The result left Alberta’s Val Sweeting as the only remaining unbeaten rink. She took a 6-0 record into her afternoon game against Quebec’s Lauren Mann.

Jones, the reigning Olympic champion, fell into second place at 6-1 after 11 draws. The four-time national champion was unbeaten in the round robin in 2013 but went on to lose to Rachel Homan in the final that year in Kingston, Ont.

Jones and her Winnipeg teammates are enjoying another strong season. They currently own top spot in the Canadian Team Ranking System ahead of Sweeting and Homan.

The Manitoba skip has been strong all week and came through when tested in an extra-end win over Homan on Monday night. But she struggled against the veteran Arsenault, who has five Scotties titles of her own.

Jones made a pair of mistakes in the pivotal eighth end. Her first shot rubbed a stone early and she followed that by knocking her own stone out of the four-foot.

“They were playing really well and we just didn’t capitalize on our opportunities,” Jones said. We had a couple of chances and if we make a good one, we’d probably have a good chance. We just didn’t make it.

“So that’s the way it goes and you’re not going to win those games if you don’t make the big shots.”

The Nova Scotia skip was a longtime second on the powerhouse team led by Colleen Jones that was dominant over a decade ago. Arsenault won the Scotties for the first time in 1999 and added four straight titles from 2001-04.

She’s back for a 12th Scotties appearance with a young lineup that includes Christina Black, Jane Snyder and Jennifer Baxter.

“Well I’ve been there, done that,” Arsenault joked after the win. “For the young-ins, they’re very excited. They were very excited just to play them. They said, ‘How often do you get to play Olympic champions?’

“So they were extremely happy. Even after we lost such a tough one last night (6-5 to Saskatchewan), they were so excited going to bed that we were going to be playing Jennifer today.”

Entering afternoon play, Saskatchewan’s Stefanie Lawton was alone in fourth place at 4-2. Prince Edward Island, Northern Ontario and Ontario were right behind her at 4-3.

The medal games are scheduled for Sunday.