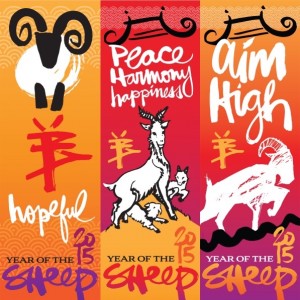 Year of the Sheep banners designed by Winnipeg artist Kal Barteski will be raised in the city’s downtown to mark Chinese New Year. (DOWNTOWN WINNIPEG BIZ)

The three variations of district banners were unveiled Thursday night during a dinner with dignitaries at Kum Koon Garden restaurant on King Street. Each design is representative to reflect the Year of the Sheep.

“I am truly honoured to be invited by the Chinese community to learn about the traditions and meanings so deeply important to their culture and the Year of the Sheep,” Barteski said. “It was a privilege to learn from their community leaders and it was my goal was to portray the emotions and aspirations for this positive, peaceful year of healing.”

Barteski’s modern brush work echoes the strokes of traditional Chinese lettering and a mix of modern and traditional seep and goat imagery and celebratory palette to honour Chinese histories.