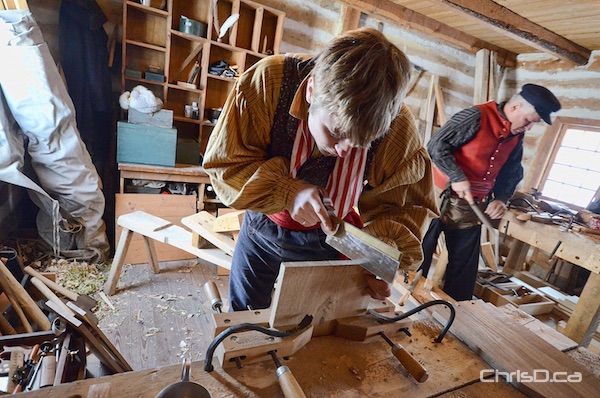 A woodworker crafts a piece in Fort Gibraltar at Festival du Voyageur on February 14, 2015. The 10-day festival wraps up on Sunday. (STAN MILOSEVIC / CHRISD.CA FILE)

WINNIPEG — Those 10 days really flew by, didn’t they? Festival du Voyageur is in its final weekend.

The annual French-Canadian winter festival has a packed schedule to end its 46th year by Sunday, but not before some more great bands, food and activities fit for the entire family.

Tonight’s headliner Buck 65 was forced to cancel his performance, but Little Miss Higgins has been added to the lineup as a replacement. Still on the schedule are Pierre Kwenders, Radio Radio, Les Chercheurs d’or and Elliott Brood to name a few.

Saturday is all about country music as QX 104 presents the night in the Investors Group Pambian Tent where PETRIC and Leanne Pearson will perform.

Earlier in the day tomorrow, the always fun mascot challenge will begin at 3 p.m. outside of Fort Gibraltar featuring 15 characters.

The closing ceremony will officially mark the end of Festival du Voyageur on Sunday at 5 p.m. in the MTS Rivière-Rouge Tent.