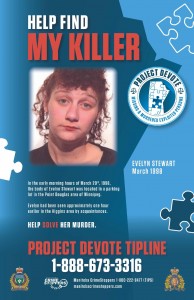 Posters surrounding the murder of Evelyn Stewart are being used to solicit new information in the case. (RCMP / HANDOUT)

Winnipeg police and Manitoba RCMP have renewed efforts to find a killer in the 1998 murder of Evelyn Stewart.

Project Devote has turned up new information, which investigators are hoping eventually leads to an arrest in the historical case.

Stewart, 25, was last seen in the early morning hours of March 20, 1998 in a parking lot in the Point Douglas area of Winnipeg.

“We believe her killer was known to her and that this was not a random attack. Someone needs to step forward and help solve the murder of Evelyn Stewart,” said WPS Det. Sgt. Randy Levasseur.

The sex trade worker was known to frequent hotels and bars on the Main Street strip, including the Northern, Sutherland and Mount Royal hotels, as well as the area of Higgins Avenue just east of Main Street. Police considered Stewart a vulnerable exploited person who worked in her profession to support her addiction to street drugs.

Project Devote, launched in 2012, is a provincial integrated task force of the RCMP and Winnipeg police focusing on missing and murdered exploited persons.

Anyone with information should call investigators on the Project Devote tipline at 1-888-673-3316. Those wishing to remain anonymous can call Winnipeg Crime Stoppers at (204) 786-TIPS (8477).