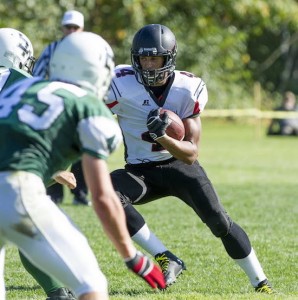 The Manitoba Bisons have recruited defensive end Mike West for the 2015 football season.

The 17-year-old comes from New Westminster, B.C. and is completing his high school playing career with the Terry Fox Secondary Ravens in Port Coquitlam.

“Mike is undoubtedly one of the top players in the class of 2015,” said Bisons head coach Brian Dobie. “A dominant force at Terry Fox, playing six different positions on both offense and defence (QB, RB, WR, DE, LB, DB), he projects as an elite defensive lineman in the CIS.”

“I am super excited. This is the university that I always wanted to go to and can’t wait to get to Manitoba and start my football and academic career,” West said.