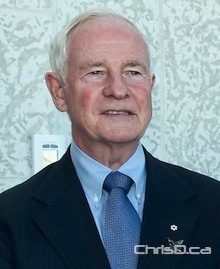 The award recognizes living Canadians and permanent residents who have made a significant, sustained and unpaid contribution to their community, in Canada or abroad.

Philip S. Lee, lieutenant-governor of Manitoba, will present the certificate and lapel pin on behalf of David Johnson, Governor General of Canada.

Robin Cox — Carman, MB
Robin Cox has contributed towards his community for many years. He was a head soccer coach for over 20 years and organized soccer clinics for coaches and players throughout south central Manitoba. He was an active school board member and at his church, he co-ordinated many programs for both adults and youth. A Royal Canadian Legion member, he has also served as head coach at the Legion Athletic Camp.

Ian MacLean — Winnipeg, MB
Ian MacLean has been active in Scouts Canada for more than 21 years. He has helped the youth plan and run meetings, provided guidance and ensured everyone’s safety. Youth have grown under his mentorship and received the best possible scouting experience including earning important badges towards their Chief Scout accreditation.