Rookies Rise to the Occasion as Jets Beat Stars 4-2 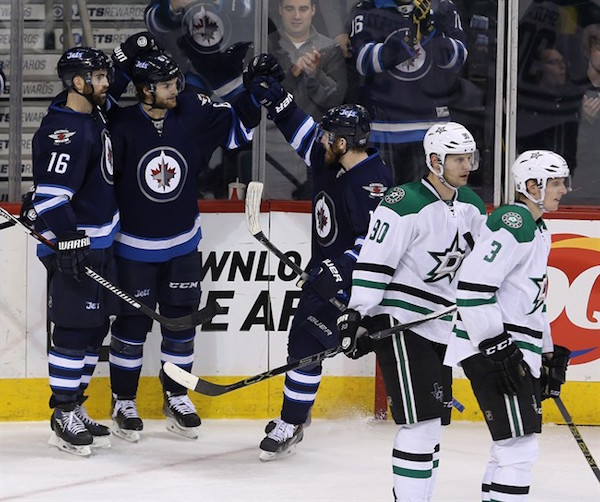 WINNIPEG — Goaltender Michael Hutchinson made his fourth start in Winnipeg’s last five games Tuesday night, and the rookie kept his team’s point streak alive with him between the pipes as the Winnipeg Jets shot down the Dallas Stars 4-2 at MTS Centre.

Hutchinson weathered a second period storm of Dallas opportunities to finish with 26 saves for his 18th victory of the season. The win keeps the Jets (31-20-11) in the top Wild Card spot in the Western Conference with 73 points.

“I thought we came out and had a great start to the game,” said the 24-year-old Hutchinson. “We knew Dallas has a lot of offensive skill… They had a big push in the second period and we were just fortunate that we didn’t get running around too much. We blocked some key shots, and whenever they did get chances I was fortunate enough I was able to get there.”

“(A) good first, a good third. I didn’t like the second,” Jets head coach Paul Maurice said to the surprise of few. “(Dallas is) good at some things — chaos and speed… We tried to do everything standing still, and that’s how their tying goal went in.”

Bryan Little opened the scoring for Winnipeg on the power play 5:05 into the first, building his team-leading goal total to the highest point it has been since the team moved from Atlanta — 24 — and moving him past Slava Kozlov into sole possession of second all-time in franchise goals with 146 through his nine-year career entirely with Atlanta/Winnipeg.

Dallas came out with a much stronger second period, out-shooting the Jets 10-4 in the frame. Eric Cole tied the game at the 12:00 mark when Little, off a pass from Tyler Myers, turned it over in the Winnipeg zone to allow Jason Spezza to set Cole up for a quick shot from the low side slot that went post-and-in.

With Winnipeg going a two-period span of 14:45 without a shot on Dallas netminder Jhonas Enroth, they made it count when they finally did break through. Rookie centreman Adam Lowry tucked in his own rebound for his seventh of the year at 14:34.

“I’d been talking to (goaltender Ondrej Pavelec) on the bench,” said Lowry. “He said, ‘Get some pucks to this goalie, he’s been sitting around for 30 minutes.’ I don’t think we had a shot in the first 14 minutes of that period, so I just tried to get that puck on net and he kicked the rebound out to me.”

“We need a game like that out of him,” said Maurice of Lowry, the freshman forward seeing an expanded role Tuesday night with injuries keeping Blake Wheeler and Mathieu Perreault out of the lineup. “Not directly in terms of tonight’s game — we’re looking for full value of the experience for Adam Lowry right now. We want him to take important face-offs. And he’s a really smart pro. So he understands that we’ve got two of our top-six (forwards) out of the lineup. We’re going to need offence from all the different lines. He picks up on that. I thought his intensity level was as high tonight as it’s been in quite some time.”

“You want your young guys feeling a sense of responsibility, that they need to be a key contributor in the game. And he was.”

Early in the third Jacob Trouba sprung Dustin Byfuglien on a breakaway, allowing the All-Star defenceman — now playing forward — to bury his 15th of the season for the insurance. Winnipeg’s Michael Frolik notched an empty-netter for his 13th with 3:06 remaining before Dallas’ Jason Demers cut the lead to 4-2 with just 1:07 left on the clock.