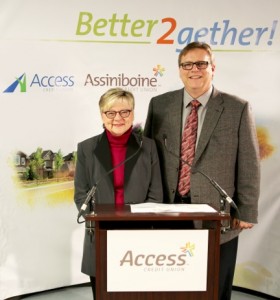 WINNIPEG — Two Manitoba credit unions are proposing to merge, creating the largest banking entity in the province and the sixth largest credit union in Canada.

Access and Assiniboine credit unions will ask their members at separate annual general meetings, and if approved, would total 38 branches with $5.70 billion in combined assets.

“We know we’re both very strong credit unions, but even better together. We believe this proposed merger is good for our communities, our members and our employees,” said Access chair Darryl Loewen.

Garth Manness, president and CEO of Credit Union Central Manitoba, said Manitoba credit unions have grown on average of 10 percent annually over the past decade and represent 38 percent of the assets in all banks and credit unions in Manitoba.

“The financial services sector is changing rapidly, with pressures coming at banks and credit unions in the areas of financial margin, technology, regulation and competition, so we’re seeing a lot of consolidations in Canada,” Manness said.

The credit union would operate two corporate head offices, in Winnipeg and in the corridor between Morden and Winkler, at the location of the current head offices.

If approved at the April 22 meetings, the new entity would come into effect October 1, 2015.