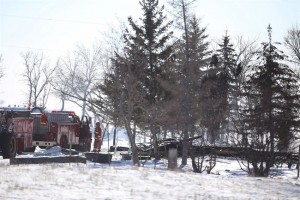 Firefighters looks on as the remnants of a house smolder following a fatal house fire in Kane, Man., on Wednesday, Feb. 25, 2015. RCMP are investigating a rural house fire in southern Manitoba that has reportedly killed a number of people, including children. Mounties say the blaze broke out early Wednesday morning near the tiny community of Kane, about 95 kilometres southwest of Winnipeg. (THE CANADIAN PRESS/Trevor Hagan)

Four children were killed Wednesday morning in a house fire near the community of Kane, Manitoba.

Bernard Schellenberg, volunteer fire chief in the RM of Morris, said it was the children’s father who made the emergency call.

Schellenberg, who was not at the scene, said the emergency call came in at around 12:15 a.m. and about 20 volunteer firefighters from nearby communities responded in four trucks.

The reeve of the RM of Morris, Ralph Groening, broke the news on Twitter Wednesday, saying the two-storey farm house was destroyed and there were fatalities.

“The adults escaped. The three youngest children were saved by the mother. The four older children who were in the second level of a two-storey home perished in the blaze,” Groening said.

Friends have identified the parents as Jake Froese and Doralee Eberhardt. Several local media outlets identified the four dead boys as Henry, Danny, Timmy, and Bobby. They ranged in age from nine to 15. People grieved their loss on Facebook.

Groening said the children’s deaths have hit the community hard. Help for the family was pouring in, including the offer of a house.

“It is a tragedy that will take a long time for them and for us to recover from.”

Those wishing to make a donation to the family can obtain information from the RM of Morris website.

— With files from John Cotter and Chris Purdy / The Canadian Press
ChrisD.ca video / updated at 4 p.m.