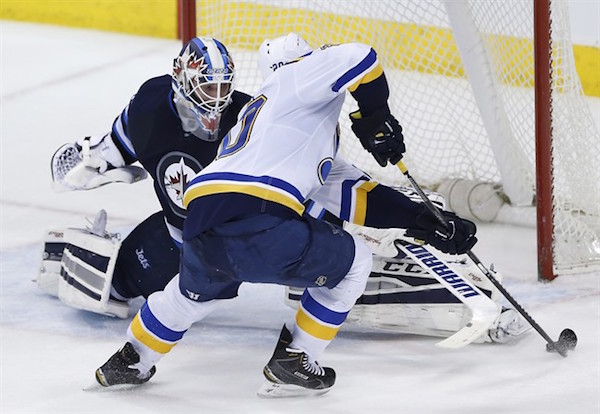 WINNIPEG — In a veritable chess match between the Central Division rivals, the Winnipeg Jets and St. Louis Blues battled in a physical and defensive showdown at MTS Centre with the Blues coming away with a 2-1 shootout victory following 65 minutes of deadlock hockey.

With roughly 20 games remaining in each club’s regular season schedules, Thursday night was the first of four remaining meetings between the two teams who could quite likely meet in the upcoming Stanley Cup Playoffs.

The physical tone was apparent early.

“It’s the tempo of the game that I think we’ve been building to since (February 3 in) Vancouver. But it was a well-played game. A hard-fought game. Good pace. Good intensity. Discipline, but hard.”

The Blues (39-18-4) broke the scoreless tie late in the second period with Patrik Berglund‘s eighth of the season, from Paul Stastny and Winnipeg-native Ryan Reaves.

3:14 into the third Mark Scheifele equalized the game with his 10th of the season for the Jets, firing a quick snapshot off an Andrew Ladd feed from behind the St. Louis net. It is Scheifele’s second goal and fourth point in his last three games after only scoring twice in his 28 games previous.

“The way these guys are wired in this room, guys want the challenge,” said Scheifele. “Guys want to test themselves against the best in the league. That’s the main reason. We have so much character in this room. It just proves it there.”

Rookie netminder Michael Hutchinson made his fifth start in Winnipeg’s last six games, and as it appears, at least for the time being, the 1-A-1-B rotation between the freshman and veteran Ondrej Pavelec is over. Hutchinson stopped 28 through regulation and overtime, but was beat for the first time this season in the shootout — coming into Thursday a perfect 14-for-14 on shootout attempts.

While Andrew Ladd was able to trickle one past Blues goaltender Brian Elliott, both Vladimir Tarasenko and Alexander Steen were able to convert their shootout attempts to claim two points in the standings.

Winnipeg comes away with a single for forcing extra time, putting the 31-20-12 club at 74 points and still firmly in the conference’s top Wild Card spot.

The Jets now see another game with heavy implications in their Western Conference playoff race as the surging 29-18-12 Los Angeles Kings visit on Sunday for a 3 p.m. matinee at MTS Centre.