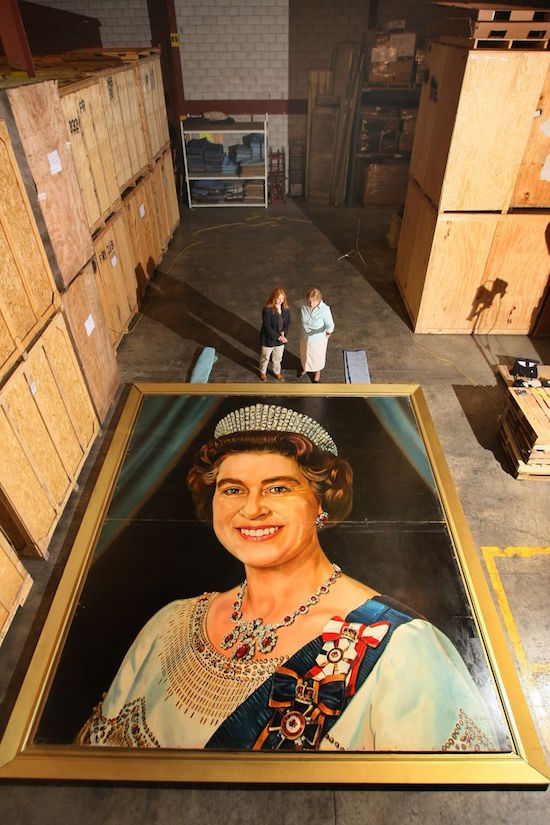 The famous large-scale portrait of Queen Elizabeth II that hung in the old Winnipeg Arena for nearly two decades is coming home.

After being in storage for the last 13 years, the painting by muralist Gilbert Burch will be returned to the city after being purchased by two CN executives.

Since leaving Winnipeg in 2002, the portrait was supposed to be relocated to the Camp-X Historical Society in Whitby, Ontario, but remained in storage for varied reasons and never saw the light of day again.

The portrait spent some time with Vancouver-based singer/songwriter Tim Lawson, who was gifted the portrait by Syd Davy of the Royal Commonwealth Society at the time. Anya Wilson, who has long acted as custodian of the portrait, continually heard stories of how Winnipeggers and hockey fans alike missed the portrait and had always wondered what had happened to it.

Wilson was recently introduced to local artist Amanda Von Riesen by telephone while on a trip to Winnipeg, who mentioned the portrait to Jamie Boychuk, a CN executive. After some negotiations, Boychuk and co-worker Michael Cory purchased the portrait and are proud to be bringing her home to Winnipeg.

“I remember the portrait very well, and I am excited to bring her back home to Winnipeg where she belongs,” Boychuk said. “It’s a very important piece of Winnipeg history, and I am so happy to deliver it back to a place where so many people remember it as part of their lives.”

Plans for where the portrait will be displayed haven’t yet been finalized.

The portrait was originally commissioned by Lieutenant-Governor of Manitoba Francis Lawrence (Bud) Jobin in 1979.