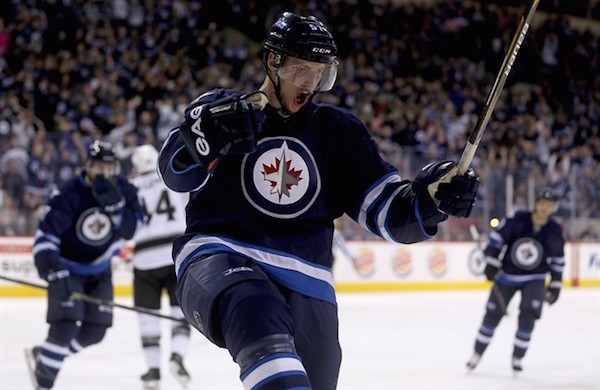 WINNIPEG — The Winnipeg Jets put the brakes on one of the hottest teams in the National Hockey League in a rare matinée at MTS Centre with a dominant 5-2 victory.

The defending Stanley Cup champion Los Angeles Kings entered Winnipeg on Sunday afternoon winners of eight of their last 10 games, but a pair of goals from Jets captain Andrew Ladd and strong defensive play from goaltender Michael Hutchinson on outward helped the Jets cruise to victory.

“We’re comfortable with the style that we play and have a good understanding of what we need to do too to win those hockey games,” said Ladd, now with 22 goals and a team-leading 52 points on the season. “I think we head into every game knowing that we can beat any team, and that’s our expectation.”

“There’s a consistency to Andrew’s game in the way he prepares, the way he practices, and the way he plays that you have to have from your leader,” said Jets head coach Paul Maurice. “Everybody follows. That’s what leadership is. He’s on the body, and then the line feeds off it.”

Recently acquired forward Drew Stafford opened the scoring for Winnipeg 6:35 into the game when he grabbed the puck off a net-front scramble and lifted it over Kings goaltender Jonathan Quick.

“If we’re moving our legs. If we’re controlling the pace physically we can compete with anybody,” said Stafford, now with two goals and four points in eight games since joining the Jets. “We have a lot of confidence in that.”

The Kings tied it up less than a minute later as Jeff Carter fired a low wrister off the rush, beating Hutchinson wide side under his glove.

The Jets then proceeded to net three unanswered goals in the second period. The first via defenceman Tyler Myers — patiently walking in and snapping one past Quick — and another two coming via Ladd, the second with just 44-seconds left in the period.

“The offensive parts we’re excited about. The big goal tied 1-1 — that game turns on that goal,” added Maurice of Myers’ go-ahead marker. “Two great decisions; one to beat the forward coming out, and then not to unload it too early and allow (Adam) Lowry to get that great screen.”

Mercy was had on Quick as Kings backup Martin Jones took to the crease to start the third period.

Los Angeles’ Carter notched his second goal of the game with 5:11 remaining with a fortunate spinning backhand at the top of Hutchinson’s crease.

With 55.3-seconds left in the game, Blake Wheeler, fresh off injured reserve with a lower-body injury, slid in an empty-netter for his 17th of the season.

The Jets host the Ottawa Senators on Tuesday before heading out on a four-game road trip through St. Louis, Nashville, Florida, and Tampa Bay.

During the game news broke of the acquisition of 32-year-old forward Lee Stempniak from the New York Rangers in exchange for Winnipeg Jets farmhand Carl Klingberg. Stempniak, a 10-year NHL vet, will provide additional forward depth for the Jets as they push for the playoffs. With the NHL trade deadline on Monday at 2 p.m., the 32-20-12 Jets sit in the top Western Conference Wild Card spot with 76 points and 18 games remaining in their regular season schedule.