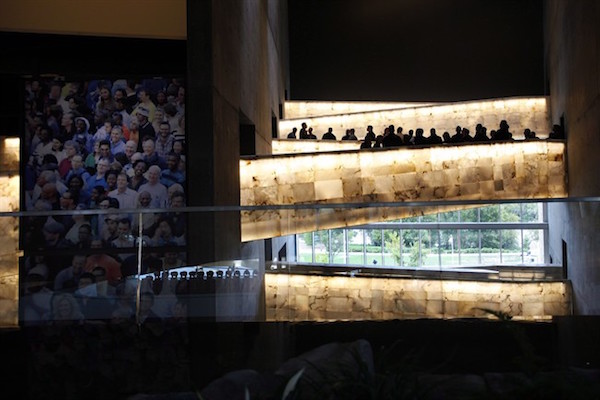 Members of the media tour the Canadian Museum For Human Rights in Winnipeg on Tuesday, Sept.16, 2014, in advance of its grand opening on Friday. (THE CANADIAN PRESS/John Woods)

WINNIPEG – It’s been five months since Canada’s newest museum officially launched with fewer than half its galleries open to visitors.

The lead-up to the opening was rocky — overshadowed by fundraising woes, as well as protest from those who wanted the museum to describe government policies toward First Nations as “genocide” and others angry about prominence given to the Holocaust over starvation of Ukrainians by the Soviets in the 1930s.

Even the splashy opening ceremony was loudly protested by aboriginal groups calling for action for missing and murdered women and living conditions on reserves.

But there is no denying the power of the final product. After some growing pains and the hurried completion of the six remaining galleries, the $351-million museum is ready for its close-up.

It is a far cry from a conventional museum, with artifacts behind glass and explanatory placards on walls. The museum is relatively open concept, with ramps that take the visitor from the earthy underground through 11 galleries to the glass-enclosed, sun-drenched tower of hope, which is taller than the Peace Tower in Ottawa.

Architect Antoine Predock “wanted people to see each other on their journey and show that the path to human rights is not a straight one,” said Maureen Fitzhenry, the museum’s media relations manager.

Each exhibit is dedicated to a theme told through art, film, interactive digital screens and text. The museum is less about artifacts — there are only 300 in all — and more about provoking thought.

The journey starts in the building’s bowels as visitors enter a dark open space where the word “welcome” is projected in 36 languages on a wall. Embedded in the floor is a 750-year-old footprint found during the site’s excavation — a reminder the museum sits on a historically significant meeting place for aboriginal people for centuries.

Ramps lead to the first gallery which asks “What Are Human Rights?” On one wall, four people explain what it means to them. On the opposite wall is an interactive timeline of 100 moments in human rights, dating from 580 to student protests in 2012. In the middle sits a ballot box used in the 1994 South African election which brought Nelson Mandela to power.

On another wall is the first sentence from the universal declaration of human rights — “All human beings are born free and equal in dignity and right.”

Visitors walk seamlessly into the Indigenous Perspectives gallery, designed by aboriginal people to celebrate their culture rather than human rights violations. The gallery features the world’s largest Metis beaded blanket.

The bulk of this country’s history is in the Canadian Journey gallery — a large room with 18 alcoves each showcasing a historical theme using multimedia or artifacts. Visitors can explore everything from Japanese internment camps during the Second World War and women’s rights to the Winnipeg General Strike and same-sex marriage.

One powerful alcove dedicated to Indian residential schools simply has video screens mounted on two school desks which include survivor testimony from the Truth and Reconciliation Commission.

The gallery Protecting Rights In Canada contains the legal documents that arguably form the foundations of Canada. There is a copy of the Bill of Rights signed by former prime minister John Diefenbaker in 1960, a 1763 royal proclamation by King George III that established protocols for relationships with First Nations and the proclamation of the Constitution Act signed by then PM Pierre Trudeau and the Queen.

After the act is exposed to 650 hours of light, Fitzhenry said the document has to go back to the Library of Canada’s archives.

The next few galleries explore genocide and mass atrocities.

From the design plans for Auschwitz to a child’s shoe from a concentration camp, the gallery dedicated to the Holocaust details how laws and bureaucracy orchestrated the murder of millions. Breaking the Silence highlights the five genocides Canada has recognized and invites visitors to explore atrocities which many argue merit the same recognition, including residential school policies.

The museum tries to end the experience on a positive note, looking at champions of human rights from aboriginal singer Buffy Sainte-Marie to Travis Price, who organized a protest in sympathy with a fellow student being bullied for wearing a pink shirt.

The final gallery, Inspiring Change, invites visitors to complete the sentence “I imagine …” Some 5,000 people have filled out the cards so far and some will eventually be showcased as part of the museum’s collection.

Adult admission is $15, youth $8, students and seniors $12. Children under 7, as well as First Nations, Inuit and Metis visitors, are free.

Admission is free the first Wednesday evening of each month, from 4 p.m. to 8 p.m.

Guided tours are an extra $5 for adults, $3 for youth and $4 for students and seniors.

Find out more at www.humanrights.ca.