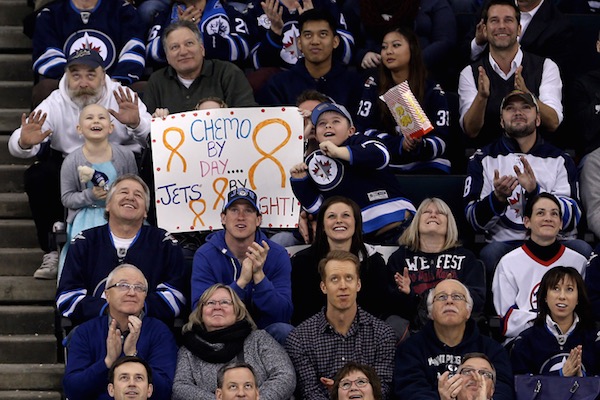 Young fan with “Chemo by Day, Jets by Night” poster was shown on the big screen during third period action between the Winnipeg Jets and the Dallas Stars during NHL hockey action in Winnipeg, Tuesday, February 24, 2015. Both teams gave a stick tap salute as the crowd cheered. (THE CANADIAN PRESS/Trevor Hagan)

WINNIPEG — A young hockey fan who gave away his signed Winnipeg Jets hockey stick to a leukemia patient at last Sunday’s game will get a replacement on Wednesday.

Keaton Hamin, 9, won a game-signed stick from player Tyler Myers last week and walked it over to Alyx Delaloye a few rows up. The seven-year-old caught fans’ attention on the jumbotron during last Tuesday’s game for her sign in the stands reading “Chemo by day… Jets by night.”

Delaloye makes weekly trips to Winnipeg from Neepawa to receive her treatments.

Ronald McDonald House Charities Manitoba took notice of Keaton’s generosity and put the call out on Twitter for a replacement stick. Winnipeg realtor TJ Stroud came forward and offered to donate his stick to Keaton, which he had won at a previous game.

“To witness the kind gesture made by Keaton Hamin to our Ronald McDonald House Manitoba guest, Alyx Delaloye, we just want to play a small part in paying it forward,” said Allison Kesler, CEO of the charity. “With the help from TJ Stroud of the Judy Lindsay Team, we all hope to make Keaton’s day a memorable one.”

Stroud, the two kids and their families will meet Wednesday evening for the exchange. 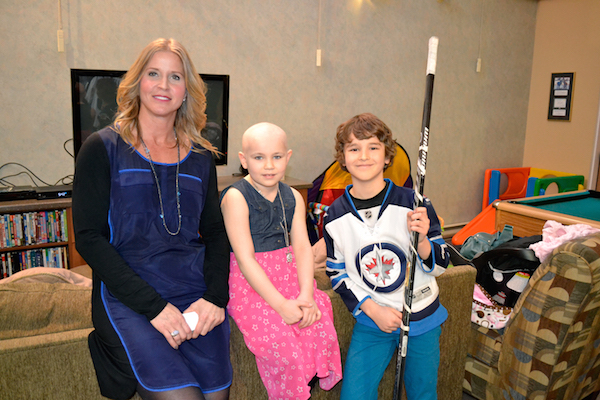