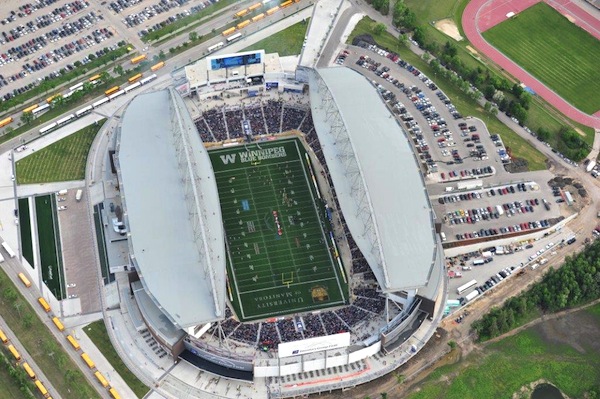 WINNIPEG — The owner of Investors Group Field is suing the architect and construction company responsible for its build due to ongoing drainage and insulation issues.

Since construction was complete, BBB Stadium has incurred costs of $4.7 million to repair snowmelt drainage into luxury suites and cracks within the facility.

“While we are extremely disappointed that we have had to deal with continuous and ongoing issues since we became the primary tenant in 2013,” said Wade Miller, president and CEO of the Winnipeg Football Club. “We believe today is an important step forward in attempting to have them resolved.”

The cost of repairs hasn’t yet been tallied, but the concrete concourse will be replaced next winter, while workers continue to install insulation in suites and at the concession level.

“The club will work closely with Triple B to ensure that any potential remediation work will not impact in any way on scheduled events, games, or concerts at Investors Group Field,” Miller added.

BBB Stadium released the following question and answers to media:

1. What’s the total cost of repairs?
Further testing and research needs to be conducted to get a true value of the cost of remediation. To date about $4.7 million worth of remedial work has been done or is underway. Based on that, it’s fair to estimate that further repairs are also in the millions.

2. Who’s going to pay for the repairs?
Triple B has filed a lawsuit against the architect and contractor to hold them legally and financially accountable on behalf of Manitoba taxpayers, sport fans and concertgoers. Triple B believes that the community deserves to have the facility that it paid for and believes that the defendants are responsible to cover those repairs.

3. Is there insurance to cover the repairs?
Triple B and the defendants have insurance policies in place with a total value of $35 million.

4. Is the stadium safe?
The building is safe today and meets all requirements for occupancy. The changes required need to be made so that the building will be safe 50 years from now and not erode from water leakage or poor heating.

5. Why take a legal recourse and not settle this out of court?
Triple B knows that the fixes are extensive and negotiating this could be complicated and protracted. There are also time limitations for bringing an action to court and we want to protect our legal position and protect the longevity of the building. Discussions can and likely will continue outside of the formal court process.

6. When will repairs start, how long will they take?
Some of the work has already begun and some has been completed. Further testing will have to be done to determine how much more remediation work is required.

7. Will it interrupt any planned events or games?
The changes required will be made off-season likely starting in the winter of 2015-16 and won’t affect any events already planned.