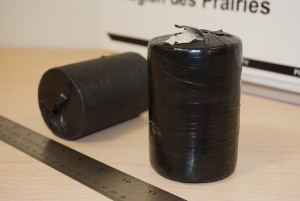 Border agents have seized a quantity of suspected cocaine aboard an aircraft at Winnipeg’s James Richardson International Airport.

The Canada Border Services Agency found the 781.80 grams of drugs on March 2 concealed inside the aircraft cabin in two cylinder-shaped bricks.

The narcotics were turned over to RCMP for further investigation.

The CBSA says this is the first significant drug seizure of the year at the Winnipeg airport.

Video courtesy of the CBSA