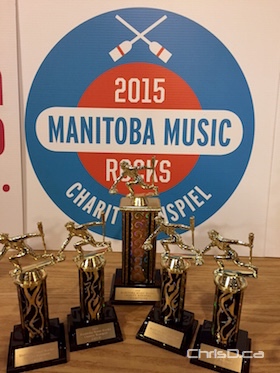 A day-long curling bonspiel with members of the province’s vibrant music community raised more than $4,400 for a special cause.

Manitoba Music and Manitoba Film & Music put on the event at the Granite Curling Club to bolster support for promising performers and organizations in music, film, performance and the creative arts. Walters passed away in June 2014 and had close ties with the province’s music and entertainment industry.

“To do it at such a fun event surrounded by the talented and generous members of our music community is particularly fitting. Uniting the community is exactly what Kevin was about,” said Sean McManus, Manitoba Music executive director.

A date and location for next year’s bonspiel hasn’t been set, but the sixth annual event will be held in early 2016.