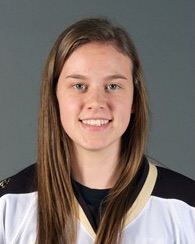 Sharman, 19, is the first Manitoba Bisons to be selected as CIS rookie of the year MVP in women’s hockey since the 2009-10 season.

The 5’8” forward won the national scoring race with 40 points (17-23-40) in 28 conference league games and becoming only the third rookie in the 18-year history of the conference to top Canada West in scoring.

“Alanna has had one of the most memorable rookie seasons in recent CIS history. Winning both the Canada West and CIS scoring titles as a first year player is a feat that few players ever achieve, let alone a freshman directly out of AAA midget hockey,” said Bison women’s hockey head coach Jon Rempel.

Rieder, 18, was eighth in conference rookie scoring with 11 points (four goals and seven assists) and tied for 11th in conference (T-24th in CIS) defenceman scoring while playing in 27 of 28 regular season games.