Woman Knocked Out by Chair Attack at Transcona Restaurant 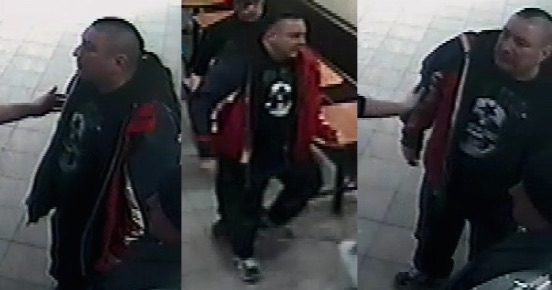 Winnipeg police are looking for this man, wanted in connection to a serious assault at a Regent Avenue restaurant on February 15, 2015. (WPS HANDOUT)

Winnipeg police are hoping surveillance photos from a serious assault on February 15 can track down a suspect.

Police say a 20-year-old woman was struck in the upper body with a chair while at a restaurant in the 1400 block of Regent Avenue West at around 2:30 a.m.

Officers responded to the establishment after two men began causing a disturbance by verbally harassing staff and customers. When a man and woman approached the service counter, an argument erupted and that’s when the woman was hit with the object.

She was left unconscious and the suspects fled.

UPDATE — Saturday, March 14 — A 43-year-old man turned him into police on Friday and is facing a charge of assault with a weapon. He was released on a promise to appear.