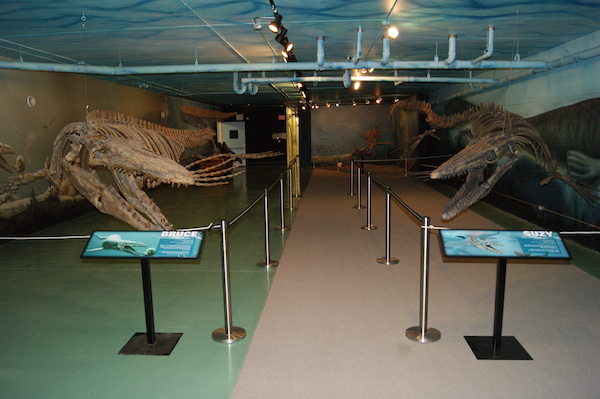 Bruce and Suzy together in the CFDC’s Mosasaur Hall in Morden, Manitoba. (HANDOUT)

A Manitoba museum has unveiled a more than nine-metre long mosasaur skeleton as the newest member of its collection.

Suzy was found in 1977 and is now on display at the Canadian Fossil Discovery Centre in Morden.

“The addition of Suzy creates an exhibit that is second to none in terms of mosasaurs and it allows our visitors so see two specimens side-by-side and up close and personal in a spectacular space,” said CFDC executive director Peter Cantelon.

Suzy joins Bruce, the nation’s largest publicly displayed mosasaur at just over 13 meters, which recently made a Guinness World Record.

“Bruce and Suzy have been alone for 80 million and 40 years give or take a few and we think it is awesome that we were able to bring them together in this way.”

The museum says mosasaurs were ferocious creatures and will allow teachers and school tours to understand how the science of palaeontology progresses to reveal new information about the specimens.