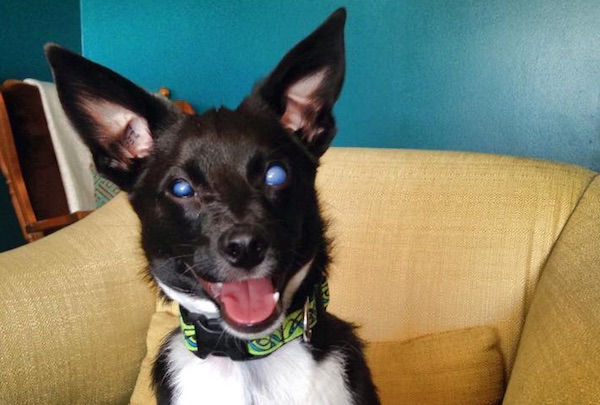 Seven-month-old Percy was blinded when hair eye was deliberately rubbed into his eyes. (HANDOUT)

A seven-month old puppy taken in by a Manitoba rescue after being blinded has received more disheartening news.

Percy has been diagnosed with a condition called corneal endothelial dystrophy, a condition that causes thickening of the cornea and fluid build-up within the eye.

Percy was blinded by his previous owner’s child when hair dye was deliberately rubbed into his eyes, causing him immense pain and blindness.

Percy was flown into Winnipeg and is now in the care of Manitoba Underdogs Rescue.

Jessica Hansen, executive director at Manitoba Underdogs Rescue, says they are looking to raise $5,000 for his care.

“Treatment options do exist, but are expensive and risky. At this time, Percy’s future is uncertain,” she said.

Percy remains on four medications to manage his condition and reduce any pain or discomfort. He also visits his vet weekly to monitor his overall health and condition.

Donations are being accepted at Dakota Veterinary Hospital and on the Manitoba Underdogs Rescue website.