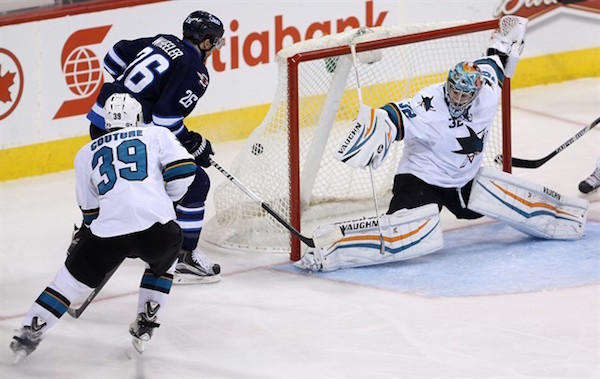 WINNIPEG — Entering Tuesday as the two clubs directly below the Western Conference playoff line with 13 games to play in the regular season, saying the meeting between the San Jose Sharks and Winnipeg Jets would be important might be a bit of an understatement.

Fortunate for the 15,016 Jets faithful at MTS Centre, the home club came out with their engines in full burn, taking a 3-0 stranglehold in the opening 13:01 on their way to a decisive 5-2 victory.

The win puts the 35-23-12 Jets back into playoff position, leapfrogging the idle Los Angeles Kings and into the second Western Conference Wild Card spot with 82 points.

The line of Blake Wheeler, Mark Scheifele, and Drew Stafford produced three goals and combined for eight points on the night.

“Those two guys are buzzing right now,” said Wheeler of his line mates. “When (Scheifele) is skating like he is right now, he’s great to play with. And (Stafford) is just so strong on the puck. He makes such smart, simple plays. I think he’s a great compliment for the two of us.”

“We realized where we were at,” added Wheeler when asked what may have sparked the Jets’ quick start. “We realized the excitement surrounding our team right now and getting in front of our home fans gave us a little extra push tonight.”

Rookie Adam Lowry lit the lamp just 70-seconds in, banking a sharp-angle shot off Sharks netminder Antti Niemi and in for his eighth goal of the season.

Mark Scheifele tucked a wrister under the crossbar at 9:39 on the power play to make it 2-0 that proved to be the eventual game-winner. Scheifele finished with a goal and two helpers to put him at 11 points in his last 10 games.

“It’s big,” said Scheifele of his line with Stafford and Wheeler clicking at this juncture of the season. “Every line is clicking. Every line is getting their chances. Every line is trading offensive pressure. That’s what we want. We want a well-balanced attack. We want every line to be contributing. It was a fun night tonight, for sure.”

The Jets struck again on the power play to make it 3-0 as Andrew Ladd tipped a Jacob Trouba point shot past Niemi. Winnipeg’s third goal on just their eighth shot on net chased Niemi from the game as San Jose head coach Todd McLellan gave the nod to backup netminder Alex Stalock.

The Sharks were able to beat Ondrej Pavelec — making a consecutive start in goal for Winnipeg for the first time since November 23 — early in the second, but the Jets veteran staved off 38 shots for his 15th victory of the season (15-14-7).

Blake Wheeler continued his torrid pace since returning from missing two games on March 1. His two late goals and an assist on Scheifele’s eventual game-winner has Wheeler at 11 points in seven games this month. It is also his fourth multi-point game in that span.

Proving far from enough to get the job done, Joe Pavelski‘s deflection on a long point shot in the game’s final minutes was his second goal of the game for the Sharks leading scorer.

The Jets continue their three-game home stand as they host St. Louis on Thursday and Washington on Saturday.