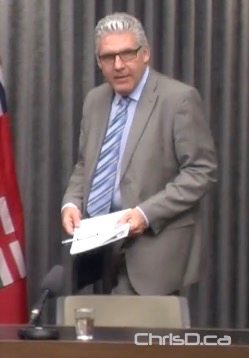 McNeil will assume his new duties on April 7 once approved by city council at a vote on March 25.

“A critical component in moving Winnipeg forward to face our challenges and modernize our growing, thriving city is hiring a new chief administrative officer who will bring an understanding of large infrastructure projects and a willingness to work in a collaborative, open, and accountable way,” said Mayor Brian Bowman.

McNeil takes over for Phil Sheegl, who resigned as CAO in October 2013. Acting CAO Deepak Joshi stepped in to fill the role before he resigned in February following a suspension.

McNeil has more than 30 years of work in the public sector, with more than 20 years of experience working with elected officials.

“I believe in getting things done in an open and transparent manner, and I am excited to be part of a new culture shift in our city,” Bowman added.