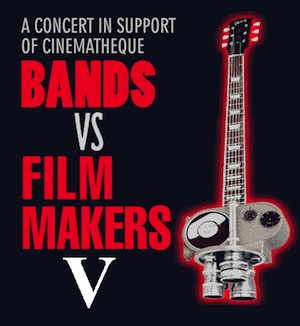 A clash of bands and filmmakers will see the two creative fields merge at the West End Cultural Centre on May 23.

Bands vs. Filmmakers 5 is a collaborative effort by the Winnipeg Film Group’s Cinematheque and WECC where five successful independent Winnipeg filmmakers will be accompanied by the performances of five great Winnipeg bands and musicians.

This year’s featured bands, musicians and filmmakers include:

Comedian and actress Aisha Alfa will host the evening.

Tickets are available now for $20 through the WECC, Ticketfly, Cinematheque, Winnipeg Film Group, Winnipeg Folk Festival Music Store and Music Trader. Admission is $25 at the door.