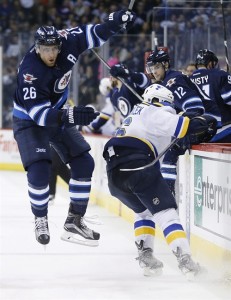 WINNIPEG — Winnipeg Jets head coach Paul Maurice referred to the St. Louis Blues as the best team in the league following morning skate, and his scrappy club rose to the occasion Thursday night as the two division rivals battled into overtime and eventually the shootout with a raucous capacity MTS Centre crowd ignited following a 2-1 Jets victory.

Ondrej Pavelec, the embattled veteran Jets goaltender, played the role of redeemer stopping 32 shots through 65 minutes in addition to halting the dangerous duo of Alexander Steen and Vladimir Tarasenko in the shootout to seal the win.

“(Pavelec) made us look good when we couldn’t look good,” said Maurice of his goaltender, who made a third-straight start after going nearly four months without consecutive nods in the Jets starting lineup.

Drew Stafford — acquired as part of the blockbuster deal that sent Evander Kane and Zach Bogosian to the Buffalo Sabres last month — lit the lamp with 6:44 remaining in regulation to tie the game and force overtime. His sixth goal and 11th point in 15 games since joining the Jets was sweetened by a marker in the shootout.

“He really has had a huge impact since he’s been here,” added Maurice of the 29-year-old winger. “No small points. He only gets big goals, big assists. He seems to elevate his game. I think there’s just so much — an enjoyment playing the game and being in that room for him.”

“Five-on-five I feel we can compete with pretty much every team in the league. We proved that tonight,” said Stafford. “We’re an elite team because we’re big, we’re fast, we’re mean, and when we get pucks to the net and we get bodies in front, most of the time good things are happening. We’re going to keep moving forward here.”

Coming into Winnipeg, the Central Division-leading Blues (45-20-6) had been riding a shutout streak dating back three games — last scored against on March 14 at home against the Minnesota Wild.

Blues captain David Backes netted the only goal of the game for his club, his 25th of the season, midway through the second period.

The two points gained by the Jets in the standings have the 36-23-12 club at 84 points — one point back of the Minnesota Wild for the top Wild Card spot and fourth in the Division with the Wild losing 3-2 in regulation to the Washington Capitals Thursday.

Winnipeg wraps their three-game home stand Saturday night against those same Capitals before they head out on a quick western swing through Edmonton and Vancouver.