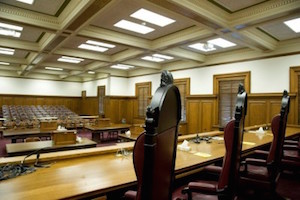 WINNIPEG – The Crown will hold a new trial for a Winnipeg man in the grisly killing of a teenaged girl more than 30 years ago, Manitoba’s prosecution service said Friday.

Mark Grant was convicted of the second-degree murder of Candace Derksen in 2011, but the Manitoba Court of Appeal overturned the conviction in 2013. The Supreme Court of Canada upheld that ruling earlier this month.

The higher courts said the trial judge erred in not allowing the defence to present evidence that pointed to another possible killer — an unidentified man involved in a similar attack while Grant was in custody.

Grant’s lawyer said Friday he was disappointed the Crown is seeking a new trial.

“It was our hope that, given the Supreme Court’s dicta and a review of the evidence that is potentially available for a new trial, that the Crown would recognize the fact that they had the wrong man in custody,” Saul Simmonds said.

Candace’s body was found in a storage shed near her Winnipeg home six weeks after she disappeared. She had been tied up and left to freeze to death.

RCMP tested the twine used to bind the girl in 2001, but results were inconclusive. A private lab, Molecular World in Thunder Bay, Ont., tested the twine and hair again in 2007. It was after that test that Grant was charged.

Simmonds said that evidence would come under more questioning at a new trial.

“The DNA evidence, from our perspective, is subject to a number of flaws and those flaws have only increased over time as we’ve had them analyzed by experts in the field.”

“I have to admit, though, that I’m convinced (of Grant’s guilt) … I can’t not be convinced,” she said after the Supreme Court ruling.

Grant, who is now in his 50s, has a long criminal history. He has spent nearly half his life behind bars for 23 offences. He has repeatedly denied killing Candace.