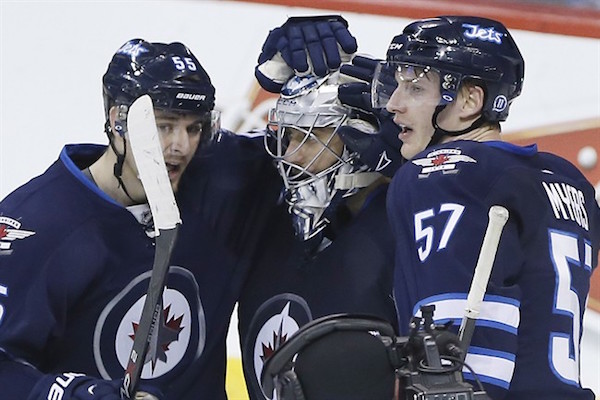 Winnipeg Jets’ Mark Scheifele (55) and Tyler Myers (57) congratulate goaltender Ondrej Pavelec (31) on a shutout against the Washington Capitals in NHL action in Winnipeg on Saturday, March 21, 2015. (THE CANADIAN PRESS/John Woods)

WINNIPEG — Ah, the life of a Winnipeg Jets goaltender. One week, they’re calling for your head. The next, you’re stopping everything in reach against one of the league’s most explosive offences and being praised by 15,016 deafening fans at the MTS Centre.

Ondrej Pavelec isn’t the only reason the Winnipeg Jets beat the Washington Capitals 3-0 Saturday night, but he played a very big role. Pavelec made 27 saves for his 13th career shutout, many of them in stunning fashion. He’s now matched a career high with his fourth straight win.

“It felt good… I didn’t have to make too many saves, I think we played well defensively,” said Pavelec. “Hockey’s 60 minutes, no matter what, and I’m happy I was able to stop loose pucks because you never know what’ll happen afterwards.”

“Anytime we had the breakdowns, Mr. Pavelec — I think we have to call him mister now — Ondrej was fantastic,” said Jets coach Paul Maurice.

It’s Winnipeg’s fourth straight win as well, as they continue a torrid March that’s entrenched them in a tight Western Conference playoff race. The Jets now sit at 86 points (37-23-12), one back of the Minnesota Wild for the first wild card spot. They’re four points up on idle Los Angeles, who have a game in hand.

Getting the important goals for Winnipeg was a line brought together by injuries, as the combination of Mark Scheifele, Drew Stafford and Blake Wheeler continue to produce at a high level. Stafford did the dirty work for the Jets game-winner, a Mark Stuart goal that came 11 minutes in.

“That’s huge for us to get that from our back end,” said Stafford. “Especially a guy like [Stuart], who works his butt off and puts his body on the line every night.

“It felt really good, that’s not really my game but it feels good to contribute,” said Stuart. “Our cycle game was really good and we put a lot of pucks at the net.”

That cycle got the Jets their insurance goal, as Scheifele got some space off a beautiful turn from Wheeler and Stafford. He then followed his own rebound after hitting the post for his 13th goal of the season. It was part of a two-point night for Scheifele, as he got the second assist on Stuart’s goal.

The line has fed off the acquisition of Stafford in the February 11 trade with the Buffalo Sabres, as his quick hands were on display throughout Saturday’s game.

“He makes great reads.. he does some really good things with the puck from the top of the circle down,” said Maurice. “He really reads when it’s just a shot and you need to get the puck to the net and when you need to make a play. Because Mark and Blake are so quick, they can react off that.”

Adam Lowry scored unassisted into an empty net late to give the game its final score. Washington falls to 39-24-10 with the loss.

Winnipeg will now make a quick trip out west, playing the lowly Oilers on Monday before an important tilt against the Canucks on Tuesday. The Jets return home on Thursday to take on the East’s top dogs, the Montreal Canadiens.