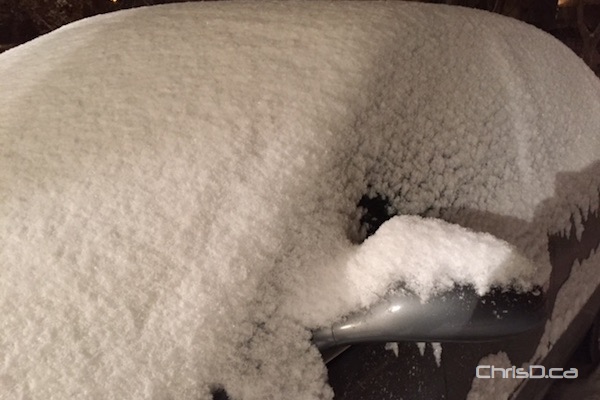 Winnipeggers woke up to an early spring snowfall on Monday, March 23, 2015. (CHRISD.CA)

WINNIPEG — Don’t write off winter just yet, at least not winter-like weather.

Winnipeg awoke Monday to a few centimetres of snow on the ground and more of it continues to fall.

Environment Canada issued a special weather statement on Sunday and updated its advisory early this morning, saying as much as 10-15 cm of snow is possible by the end of Wednesday for southern Manitoba.

“Computer weather models indicate the possibility for the development of an intense weather system which is expected to move across North Dakota and bring a significant snowfall to Southern Manitoba starting late Tuesday and continuing into Wednesday,” the statement read.

Winnipeg will see about 2-4 cm by the time the snow tapers off by this afternoon. On the plus side — literally — temperatures will rise to 7°C on Wednesday and melt this unfortunate accumulation away. Today’s forecast high is 2°C.