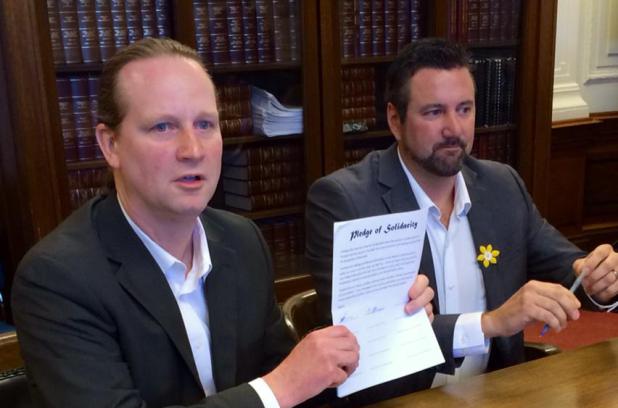 Rob Altemeyer and Dave Gaudreau have drafted a solidarity pledge to try to heal the divided NDP party. (CHINTA PUXLEY/TWITTER)

Two backbenchers in the Manitoba government have drafted a loyalty pledge they say will help unite their badly divided party.

Rob Altemeyer and Dave Gaudreau came up with the oath to not leak information to the press that could be damaging to the NDP.

The pledge also promises to work toward reconciliation within the governing party, which has been torn apart by an internal revolt.

Premier Greg Selinger barely managed to hold on to his job in a leadership contest prompted by the dissent.

Altemeyer, who slammed those who challenged Selinger’s leadership, says the pledge is a way for the party to unite.

No one else was on hand to sign the pledge, which will be posted in the caucus room for several weeks.