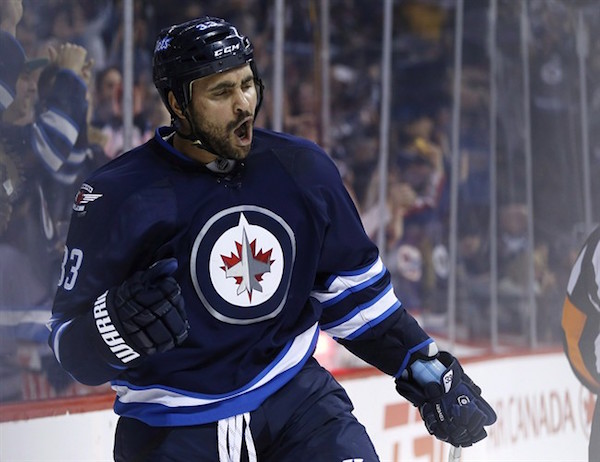 The Winnipeg Jets may be without defenceman Dustin Byfuglien for key games in their drive for the playoffs.

Byfuglien is facing a suspension of up to five games after delivering a vicious cross-check to the back of New York Rangers centre J.T. Miller on Tuesday night.

The play occurred late in the second period of Winnipeg’s 3-2 loss to New York. Miller had fallen to the ice near the crease after taking a swipe at a rebound off the pads of Jets goalie Ondrej Pavelec. The 260-pound Byfuglien looked down at the prone Miller and drove his stick in to the back of the Rangers forward’s head, also falling to his knees.

“Violent, deliberate, could have broken his neck,” New York head coach Alain Vigneault told reporters after the game. “It was one of the most vicious cross-checks I’ve seen this year.”

Byfuglien will have a phone hearing with the NHL’s Player Safety department on Thursday. Five-game suspensions are the maximum punishment the NHL can assign in a phone hearing.

Winnipeg has lost its last two games and is just two points ahead of Los Angeles in the race for the Western Conference’s second wild-card spot. The Jets have five games remaining in the regular season, while the Kings have six.