Passengers from Crashed Flight in Halifax Getting Financial Help from Airline 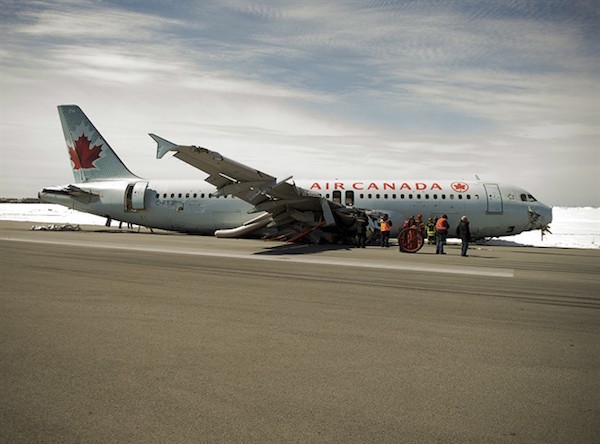 Transportation Safety Board invesigators and airport firefighters work at the crash site of Air Canada AC624 that crashed early Sunday morning during a snowstorm, at Stanfield International Airport in Halifax on Monday, March 30, 2015. The flight had 133 passengers and five crew members. (THE CANADIAN PRESS/Andrew Vaughan)

TORONTO – Passengers who were aboard an Air Canada plane that slammed to the ground at the Halifax airport last Sunday are receiving some financial assistance from the airline.

Air Canada has not divulged the amount, but various media reports say each of the 133 passengers on Flight AC624 are receiving $5,000.

The airline says the funds are meant to cover immediate and interim expenses, adding there is no requirement for passengers to sign any commitment to receive the money.

The Airbus A320 was flying from Toronto when it slammed into the ground about 335 metres short of the runway, then skidded for another 335 metres before stopping.

The wreckage was removed from the main runway at Halifax Stanfield International this week after the Transportation Safety Board completed its examination at the site.

The TSB said it would maintain possession of the aircraft for further examination as it investigates what happened.

The airport authority said Wednesday that the runway, one of two at the airport, was to remain closed until any necessary repairs were completed.