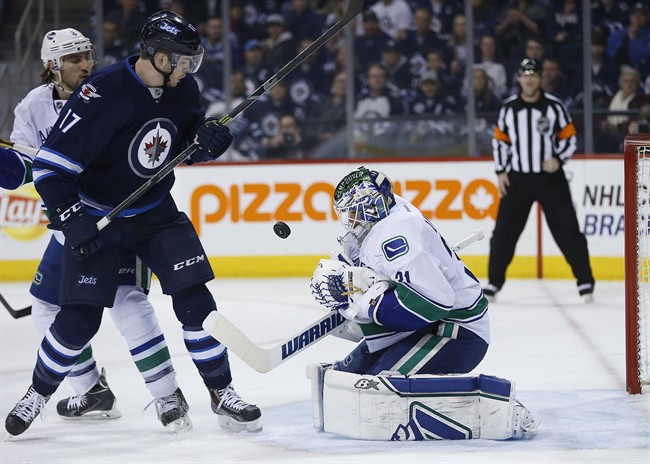 “A lot of credit goes to my linemates,” said Stempniak, now with five goals in 14 games since joining the Jets via trade on March 1. “(Mathieu Perreault) has been great since he’s been back. He creates a lot out there. For me, just trying to get open once he has the puck. He plays hard. He competes hard. He’s really creative with the puck. It’s a pretty good blend for a line (with centre Adam Lowry).”

Perreault — in his third game back after missing over a month with a lower-body injury —added three helpers, including the lone assist on Stempniak’s game-winner.

“Especially this time of the year, you’ve got to find a way to bear down in the games,” said Perreault, now at 40 points in just 59 games this year. “We gave up a lot of good chances at the end.”

It came as close as a hit post behind Jets goaltender Ondrej Pavelec with just over a minute to play and the Canucks within a goal. Near heartbreak, again.

“It’s just those things where, a bounce here, a bounce there. It could go in for us. The last two games it’s gone in for them,” said veteran forward Jim Slater of Winnipeg’s two late-game heartbreak losses to the Blackhawks and Rangers. “We played a solid game for a long time against those two teams. They definitely have more experience than us in those situations, but (our) team is getting there, and we feel like we can compete in every game.”

The Jets struck twice in the opening 5:24 of the game — just 50-seconds apart — as Slater buried his fifth and Michael Frolik his 18th to give Winnipeg a quick 2-0 lead.

But Vancouver wouldn’t let the Jets get too far ahead as the Sedin Brothers — Henrik and Daniel — both notched goals in the opening period to even things up. Winnipeg was able to regain their lead in short order as Stempniak buried an easy tap-in on a laser-guided cross-ice pass from Perreault 36-seconds later.

The second period saw two key breakaways come mere moments apart. Pavelec made a critical blocker save to stop Radim Vrbata in all alone, then Mark Scheifele fired home his 15th of the season in the period’s final minute to once again put Winnipeg in front by a pair.

Then immediately off the subsequent faceoff, Canucks defenceman Kevin Bieksa fed a streaking Alex Burrows, beating an out of position Toby Enstrom, for a breakaway goal to cut the Jets’ lead to 4-3. It took all of eight seconds.

Stempniak’s second of the game made it 5-3, but Vancouver closed in once again as Burrows notched his second to make it 5-4 with 2:05 remaining.

The Jets now head out on a three-game Central Division road trip through Minnesota, St. Louis, and Colorado before returning home for their regular season finale against the Calgary Flames on April 11 — a game that may carry heavy playoff implications for both clubs.

For the time being, Winnipeg (40-26-12, 92 points) moves back into the final Western Conference Wild Card spot, while Los Angeles (90 points), Calgary (91 points), and Minnesota (95 points) all see action later Saturday night as they jockey for playoff position.

← Previous: Canadians Cashing in at the Grocery Aisle with New App Next: Bee on the Lookout This Spring →
Tags: Hockey | MTS Centre | NHL | Winnipeg Jets