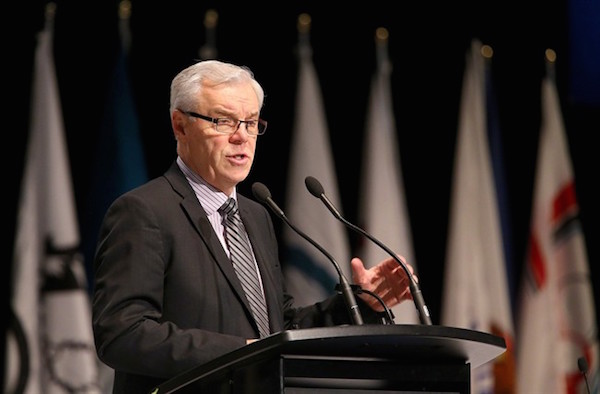 Manitoba Premier Greg Selinger speaks during opening ceremonies at the Assembly of First Nations Election in Winnipeg on December 9, 2014. (THE CANADIAN PRESS/Trevor Hagan)

WINNIPEG — Support for Manitoba’s governing NDP government remains mainly where it was following the party’s leadership race in March.

NDP support is up slightly to 29 percent among decided voters — up from 26 percent in December.

The opposition Progressive Conservatives are enjoying a 44 percent support rate, which is down from 48 percent in December.

One-in-five Manitobans would cast a ballot for a Liberal candidate (20 percent versus 19 percent in December). Seven percent of voters would cast ballots for the Green Party or other parties not represented in the Legislature (unchanged from December). Twelve percent of those surveyed were undecided.

The province-wide survey was conducted via telephone between March 17 and April 1, 2015 among 1,005 Manitoba adults. The results are within +/- 3.1 percentage points of what they would have been if the entire adult population of Manitoba had been interviewed.