‘Not Guilty, Your Honour,’ Mike Duffy Says on Day 1 of Senate Expenses Trial 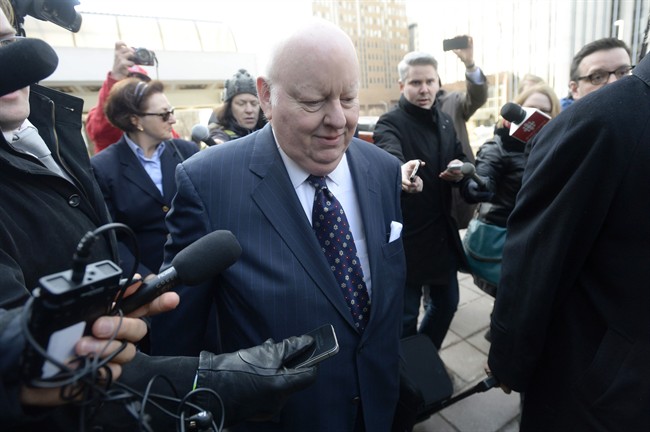 OTTAWA – The opening act of the year’s most eagerly awaited political legal drama finally got underway Tuesday as suspended senator Mike Duffy formally pleaded not guilty to 31 charges of fraud, breach of trust and bribery.

Duffy, the television personality-turned-senator whose disputed expense claims have rocked the Conservative government to its foundations, delivered the plea after the court clerk read all 31 charges into the record.

“I am not guilty, Your Honour,” Duffy, clad in a dark suit adorned with a white pocket square, told Ontario Justice Charles Vaillancourt in a clear, steady voice.

Duffy arrived at the courthouse shortly before 10 a.m., holding his tongue as a throng of reporters and camera crews surrounded him and his lawyer Donald Bayne.

At one point, Duffy paused to suggest to Bayne that perhaps they should make a statement. “Let the guys get set up here,” he said as they walked toward the courthouse entrance.

“No, no, no, Mike, we’re going into court,” Bayne replied. Then, to the mass of journalists, he said: “What we have to say we will say in the courtroom, period.”

Vaillancourt, a 25-year veteran of the Ontario Court of Justice, entered the courtroom a few minutes before 11 a.m.

The trial, currently scheduled to last more than 40 days, will give Duffy a chance to clear his name as he faces allegations of bribery, fraud and breach of trust.

Ever since questions about his expense claims surfaced two years ago, Duffy has denied any wrongdoing.

But there is more at stake than Duffy’s reputation.

While police investigators have raised questions about the former broadcaster’s living and travel expense claims while he was a sitting senator, the credibility of the Conservative Party of Canada and some key players in the Prime Minister’s Office is also likely to be dragged into the spotlight.

At the centre of the bribery allegation is Nigel Wright, Prime Minister Stephen Harper’s former chief of staff.

Wright resigned after a media report revealed he provided a $90,000 cheque used to repay expenses that Duffy had claimed since being appointed by Harper.

The Mounties have said there was no evidence to support criminal charges against Wright, who has always maintained he was acting in the public interest and that his only goal was to “secure the repayment of taxpayer funds.”

Duffy was appointed as a senator from Prince Edward Island, where he and his wife own a home.

Senators and MPs are allowed to claim up to $22,000 to cover accommodation and meal expenses while in Ottawa if they live more than 100 kilometres outside of the national capital region.

A critical question to be raised during the trial will revolve around whether Duffy’s primary residence is in P.E.I. or in Ottawa, where he has lived and worked since the 1970s.

Nine counts of fraud and nine counts of breach of trust are also among the charges, laid in connection to expenses unrelated to Senate business.

The RCMP have also alleged in court documents that Duffy paid a friend $65,000 for “little or no apparent work.”

To accommodate all of the journalists that are covering the trial, an overflow room has been set up at the Ottawa courthouse, complete with large TV screens.

Bayne has indicated previously that his client may be holding onto key evidence to present at trial. Bayne has also insisted that there has been no criminal wrongdoing.

The Crown is represented by prosecutors Mark Holmes and Jason Neubauer.

As a scheduled fall election approaches, the trial could prove damaging to the Conservative party.

RCMP documents filed in court allege that the chair of the party’s fundraising arm, Senator Irving Gerstein, discussed the possibility of paying back up to $30,000 of Duffy’s expenses.

That offer was later rescinded when the amount ballooned to $90,000.

But the Conservative Fund of Canada did cover Duffy’s legal expenses of more than $12,000.