By Lori Ewing, The Canadian Press 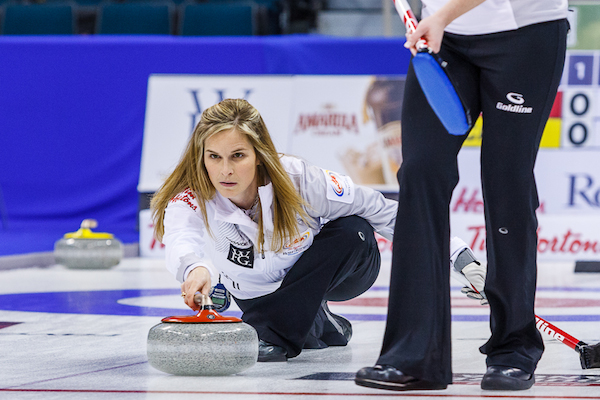 Jennifer Jones delivers a rock leading up to her opening day victory over Chelsea Carey at the 2013 Tim Hortons Roar of the Rings, Sunday, December 1, 2013. (CHRISD.CA FILE)

TORONTO — Jennifer Jones and Brent Laing will be in the same city this weekend, curling under the same roof.

And that’s a notable accomplishment in itself for the soon-to-be married curlers, who make long-distance relationships look good.

Jones, the reigning Olympic women’s champion, and Laing are getting married in Mexico on June 1, but will continue to straddle two provinces — she’s based in Winnipeg, he curls for Kevin Koe’s rink in Calgary. They’ll eventually put down roots somewhere together, Jones says, perhaps after the 2018 Winter Olympics.

“We’re probably going to be a married couple that doesn’t live together. But we really do like each other a lot,” Jones said, laughing. “Everybody always asks where you live, and it changes for us. We kind of just go depending on what our schedules are.

“That’s what I love about our life, our home is where each other is, and we’re so thankful for that. And we’re very happy, we’re happier than anybody I know. We don’t have a home base a lot of the time, but we figure it out.”

Laing proposed to Jones on a Costa Rican beach last May. The couple is competing this week at the season-ending Players’ Championship this week at Ryerson University’s Mattamy Athletic Centre. The event will cap a whirlwind 18 months for Jones — and their two-year-old daughter Isabella, for that matter.

“Isabella has been on so many flights now, she’s just like a well-travelled machine,” Jones said. “Honestly, she even knows how to go through security. She stands and waits for them to call. She knows everything has to go in the little bucket and we play a game to see it on the other side.”

Jones spoke Tuesday as an ambassador for Fuelling Women Champions, an initiative of Dairy Farmers of Canada.

The 40-year-old skip was back in Canada after her recent silver-medal performance at the world championship, and said she cherishes the chance to be a role model for young girls.

“I still can’t believe it to be honest, and it’s the biggest honour that you’re ever going to get, especially when girls come up to you and say that you’re their hero or their idol and they look up to you,” Jones said. “You never start out in life thinking that’s going to be you and that’s a huge responsibility and something we don’t take very lightly.”

At last month’s Scotties Tournament of Hearts in Moose Jaw, Sask., Jones met Gabrielle Wuschke, a 17-year-old from Regina who as cerebral palsy. It was the teen’s dream to meet Jones at the Scotties a year earlier, but Jones was in Sochi at the Olympics.

“I wrote her a letter and said ‘I promise, we will meet one day,’ and then it happened this year, so it was very special,” Jones said. “It was so emotional, I think of how much it impacted her, it impacted me almost even more. Just to know that one little thing that you can do to impact somebody’s life is an incredible honour.”

Jones said women’s curling is fortunate to enjoy huge audiences. Her victory over Alberta’s Val Sweeting in the Scotties final — which was up against the Oscars — drew over a million viewers. Still, the Brier is played in a bigger venue, so in front of a larger live audience, and the prize money is higher.

The Players’ Championship is the finale of the 2014-15 Pinty’s Grand Slam of Curling season. Twelve men’s and 12 women’s teams are battling for a $200,000 purse in a round-robin style bonspiel.