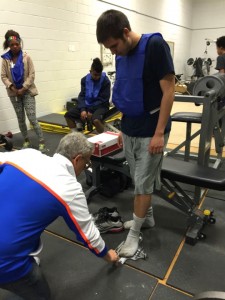 Brian Scharfstein, president of Canadian Footwear, measures a student’s foot at the University of Winnipeg. (HANDOUT)

WINNIPEG — Students from Gordon Bell High School have received a shoe donation from a Winnipeg-based company.

Students are taking part in 32 hours of instruction over an eight-week period, which is being taught through the University of Winnipeg’s Gupta Faculty of Kinesiology and Applied Health.

“My greatest passion is to help those in need,” Scharfstein said. “This is a great program that we’ve had the opportunity to participate in for the third time. Knowing we can make a difference is all that matters.”

Each session involves one hour of physical activity, followed by a half hour education component and a half hour learning about nutrition and preparing a healthy snack. The next session starts in October 2015 with up to three inner-city schools expected to participate simultaneously.

← Previous: Manitobans Don Pink in Day for Anti-Bullying Next: Winnipeg Golf Courses About to Open →
Tags: University of Winnipeg | Winnipeg