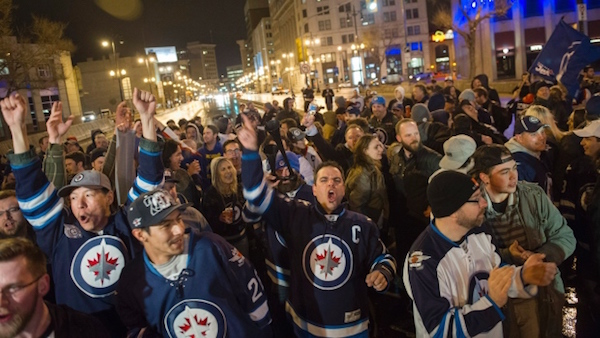 Jets fans gather at the intersection of Portage Avenue and Main Street in Winnipeg on Thursday to celebrate the team clinching an NHL playoff spot. (David Lipnowski/The Canadian Press)

DENVER — The Winnipeg Jets have clinched their first post-season berth since returning to Manitoba.

The Atlanta Thrashers were in the 2007 Stanley Cup playoffs but did not win a single game in the post-season.

The Thrashers moved to Winnipeg in 2011.

Winnipeg has not hosted an NHL playoff game since the original Jets lost to the Detroit Red Wings in 1996.

That off-season the Jets moved to Arizona and became the Coyotes.