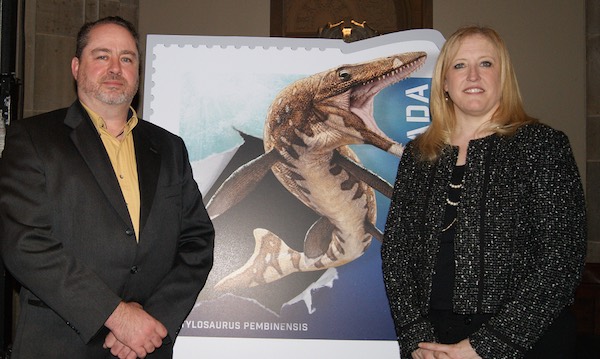 The world’s largest mosasaur housed at a museum in Morden, Manitoba is the subject of a new Canada Post-issued stamp.

“Bruce” set a Guinness World earlier this year and will now be featured in the corporations Dino series for letter mail.

“It is really a spectacular and rare thing to have your organization be associated with something as incredible as a stamp from Canada Post,” said Peter Cantelon, executive director of the Canadian Fossil Discovery Centre, where the mosasaur is located.

“Immortalizing ‘Bruce’ this way speaks volumes about the importance of palaeontology and the Canadian Fossil Discovery Centre to the country, the province of Manitoba and the City of Morden — we are proud to have been considered for this prestigious series.”

The image on the stamp was illustrated by renowned Canadian paleo-artist Julius Csotonyi.

The stamp was unveiled during a ceremony on Thursday at the Royal Ontario Museum in Toronto. It will go on sale at Canada Post outlets across the country in various packages on Monday, April 13.