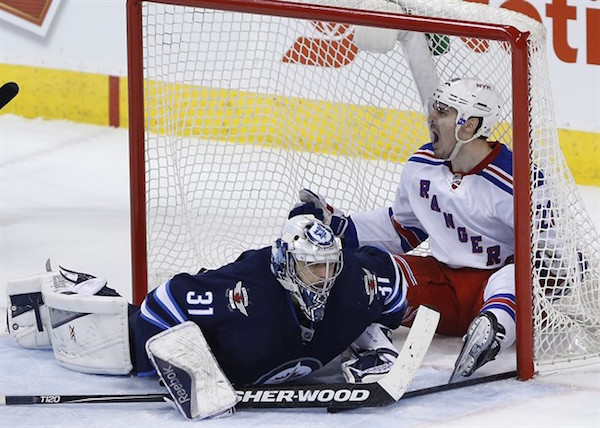 WINNIPEG – If you need great goaltending to go deep in the NHL playoffs, Ondrej Pavelec might deliver that for the Winnipeg Jets.

Pavelec is 4-0-1 in his last five starts and will lead the Jets into the first-round clash with the Anaheim Ducks riding a franchise-record trio of shutouts.

“To get three in a row is spectacular — the right time to start clicking,” Jets captain Andrew Ladd said after practice Monday.

“We’re happy for him. … We’re extremely confident in what he can do behind us if we have a mistake or a breakdown.”

Pavelec’s shutouts came in a 2-0 win against Minnesota, 1-0 against St. Louis and a 1-0 shootout loss to Colorado. He turned aside a total of 83 shots over a span of 187 minutes 5 seconds, including a win over Vancouver.

The 27-year-old, who has never played in the Stanley Cup playoffs, finished with a 22-16-8 record that featured career highs for save percentage (.920), goals against average (2.28) and five shutouts.

Pavelec is also 9-2-1 in his last 12 starts, a run that began with his first return in net after he let in St. Louis defenceman Barret Jackman’s long, late shot that gave the Blues a win March 10.

He replaced rookie Michael Hutchinson and helped the Jets get back into the game yet took plenty of heat from fans and critics for the Jackman blunder from just outside the blue-line with 63 seconds left.

Coach Paul Maurice gave Hutchinson his eighth consecutive start in the next game, a 4-2 loss to Florida, and then went back to Pavelec. He reeled off five straight victories and grabbed a hold of the starting job.

“Hopefully, Pavs stays playing the way he is and we go on a nice, long run,” said Hutchinson, who finished the season with a 21-10-5 mark after a regular-season finale win over Calgary on Saturday.

“But at the same time, I’m ready if I get an opportunity. It’s exciting knowing the possibility that you could be playing in the Stanley Cup playoffs.”

Maurice, who also rotated the goalies during the season, said he’s happy with his goaltending options.

“Critical piece in the underdog role, your goaltender’s probably going to have to be as good or better than theirs,” he said. That being said, I’ve got lots of confidence in Hutch. For a big bulk of the year, he was getting the big games. I’ve used two goaltenders in the past.

“Based on the way Ondrej’s played for us, I’ve also run guys real hard so we’ve got good goaltending. We’re in good shape.”

While the Jets were 0-1-2 against the Ducks this season, their last game was Jan. 11 before Winnipeg added depth to its roster with forwards Drew Stafford, Lee Stempniak and Jiri Tlusty and defenceman Tyler Myers.

“We’re a huge, decided underdog in this series,” Maurice said with a smile. “They finished first, best team in the Western Conference. We didn’t. But we have some confidence in our game.”