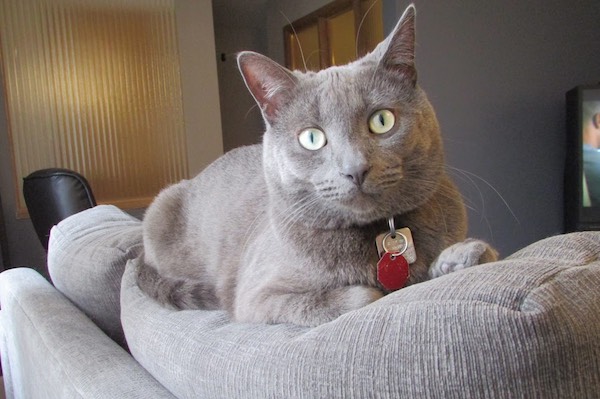 Chandler has been named Winnipeg’s No. 1 cat after a month-long contest. (HANDOUT)

Winnipeg has crowned the city’s No. 1 feline.

Chandler was introduced Tuesday after a public contest to waive a lifetime of cat licence fees. And the bragging rights also don’t hurt.

The cat is a one and half year old Russian Blue belonging to sisters Amy and Amanda Palmquist.

“Chandler is a true fan of responsible pet ownership because he wants to feel safe. He knows that we love him more than anything but he is a sneaky fellow,” said Amy.

“He likes to play a game with us called ‘try to sneak out of the house door without the humans knowing.’ It’s rare that he actually wins at that game, but we bought him a licence so if he were to ever get out and wander away from home, he will be returned back home safe and sound.”

Besides the free licence, Chandler also received a commemorative plaque.

Sixty cats entered online — or had their owners enter for them — between February 27 and March 27.

The annual licence fee for spayed or neutered cats is $15 and $50 for intact cats.