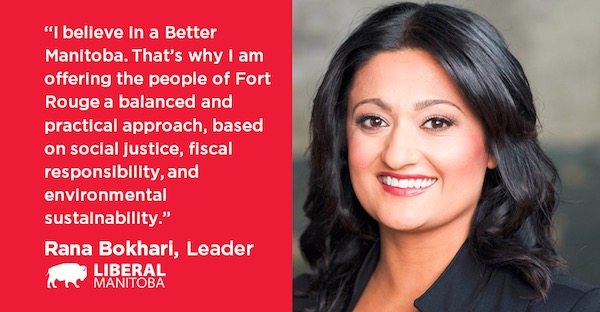 WINNIPEG — Manitoba’s Liberal leader will seek a legislature seat in the constituency of Fort Rouge in next spring’s provincial election.

Rana Bokhari was chosen as the party’s leader in 2013, but has never held public office.

“Fort Rouge is a constituency with a strong Liberal history and is in the heart of Winnipeg. Fort Rouge is such a diverse, open, and dynamic area, and I really look forward to seeking to represent the people of Fort Rouge by working hard and earning their trust,” Bokhari said.

Fort Rouge is currently represented by Jennifer Howard, one of five former NDP cabinet ministers who publicly challenged Premier Greg Selinger’s leadership. Howard has said she intends to run for re-election. In 2011, Liberal candidate Paul Hesse finished second in Fort Rouge with 23 per cent of the vote.