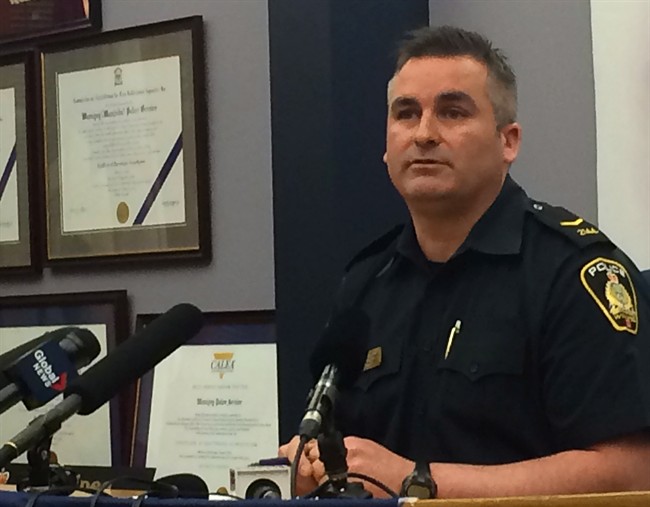 Winnipeg Police Service Const. Jason Michalyshen answers reporters questions Thursday, April 16, 2015 about an investigation into photographs of former female dance students at the Royal Winnipeg Ballet. The ballet said it had parted ways with an instructor under investigation for possibly taking nude or semi-nude pictures of underaged students more than 20 years ago. (THE CANADIAN PRESS/Steve Lambert)

The Royal Winnipeg Ballet has fired an employee under investigation by police for allegedly taking nude and semi-nude photographs of teenaged dancers.

The allegations in a Maclean’s magazine article state the photo sessions happened over the span of two decades beginning in the 1980s. The cover story, titled “Ballet betrayal,” goes on sale this week.

Executive director Jeff Herd says the photographer was put on administrative leave, but was then let go as the investigation continued.

“We cannot comment on any of the allegations or stories that are currently circulating in the media. What we do know is that there is an investigation and we are fully cooperating with the authorities through the process,” Herd said in a statement.

“Our first and foremost concern is always for the safety and well-being of all our students, staff, and patrons; and we will always put these concerns at the forefront.”

Winnipeg police said the investigation was nearly complete and the Crown was being consulted as to the next steps. Police released few details, other than to say there are several alleged victims, one unnamed male suspect and the events date back more than 20 years, when privacy and pornography laws were different.

“The significance of time, the changes in laws — there are a number of complexities that we are dealing with, with respect to the investigation,” said police spokesperson Const. Jason Michalyshen.