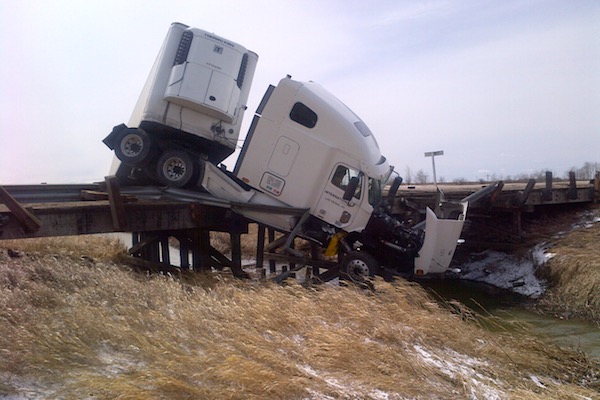 The cab of a semi hangs off the Cooks Creek Bridge in the RM of Springfield on Tuesday, April 21, 2015. (RCMP HANDOUT)

Extreme winds and slippery road conditions are being blamed for a single-vehicle crash involving a semi-trailer truck on Tuesday morning.

The truck was travelling on Cooks Creek Bridge, seven kilometres east of Dugald on Highway 15, when the driver lost control and crashed through the guardrail just before 11:30 a.m.

The bridge was completely blocked as the cab was hanging over the bridge. The male driver from Nevada was travelling eastbound when he came upon slush.

As of 2 p.m., traffic was being rerouted from Highway 15 down gravel roads.