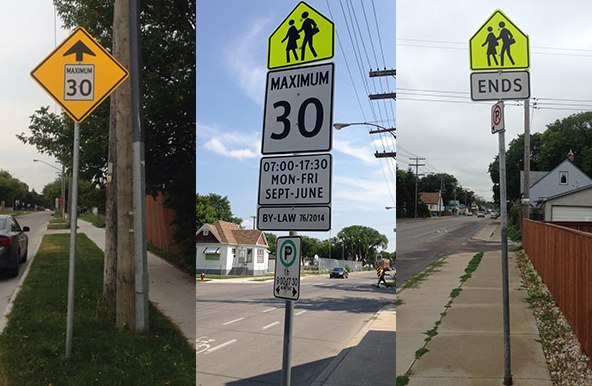 WINNIPEG — CAA Manitoba wants to see improved signage in school zones across the province in an effort to inform more drivers of the reduced speed limits.

Legislation introduced in 2014 reduced the speed limits in school zones from 50 km/h to 30 km/h. Since then, motorists have been learning to adjust their speeds accordingly, but sometimes the slower limits can catch them off guard.

“We want to make it fairer for motorists,” said Mike Mager, president and CEO of CAA Manitoba. “Even adding flashing amber lights to the signs could make the (sic) more prominent, meaning more people slowing down and in turn, ensuring the safety of our kids.”

CAA says they don’t believe motorists are blatantly defying the law, but rather many drivers aren’t aware they are in a school zone due to signage that doesn’t stand out.

The auto club says even adding flashing amber lights to the signs could be enough to warn drivers of the speed decrease.

Mager also says revenues collected from speeders in school zones should go back to the school’s road safety initiatives, or to help pay for sign improvements.