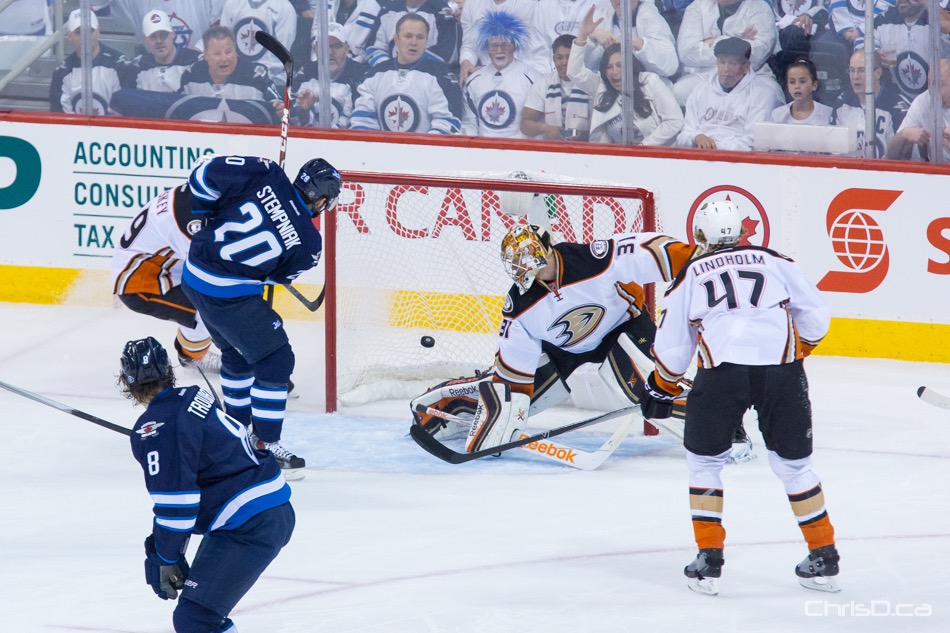 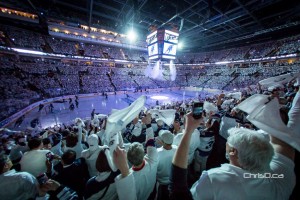 WINNIPEG — The Anaheim Ducks made it three straight comeback wins Monday night, breaking hearts across Winnipeg with a 5-4 overtime win. The loss spells disaster for the Winnipeg Jets, as they now trail their first round series 3-0. The Ducks will look to move on to the second round on Wednesday at MTS Centre.

That MTS Centre, by the way, was impossibly raucous as 15,016 fans celebrated the first playoff game in Winnipeg since 1996. They helped their team get out of the gate strong, with sustained zone time and an opening goal.

“That’s as good a building as I’ve ever seen in my life,” said Jets coach Paul Maurice. “We had the jump, the legs because of it… and we needed it, we used it to full effect.”

“It was an unbelievable experience in the building,” said Lee Stempniak, who opened the scoring for the Jets halfway through the first. “I personally haven’t had anything like that before and we certainly played off the energy.”

After the Jets dominated the opening minutes, it was a long seesaw battle — one of the better games of the young NHL playoff season. Fowler answered with his goal with five seconds left in the first period, quieting the crowd after taking advantage of a blue line turnover. Corey Perry, the subject of fan derision throughout the night, opened the second period with his third of the playoffs, putting in a one-timer pass from Hampus Lindholm.

Winnipeg, though, answered shortly after. Six minutes into the second, Myers blasted in a point shot. Three minutes later, Wheeler broke his playoff goal drought, grabbing a rebound and putting a wrist shot in short side.

“It was special, it was great, the fans were unbelievable. It’s one you always remember, you just wish it was more fond memories,” said Wheeler.

Anaheim would then tie the game again on a Kesler goal with four minutes to go, before Little unleashed a highlight slapshot from the slot to regain Winnipeg’s lead and close a frantic second.

A tense third followed, and once again Winnipeg was unable to hold their lead late. Kesler scored off another Ducks one-timer, a beautiful pass from Silfverberg across the ice. Winnipeg was then blessed with a power play to close regulation, as Little had a maniacal shift — flying around the zone, putting a wrist shot off the post, then getting robbed by Frederik Anderson with the glove.

“It’s kind of been the story of the series, we just can’t get a bounce against these guys,” said Little. “If we knew what it was, we’d fix it. You have to give them credit. They don’t stop. They go right to the end of the game, it almost gets in your head how good they are at it.”

The Jets will have to get the Ducks out of their heads if they want to extend the series. Wednesday’s Game 4 will be a last gasp opportunity for the Winnipeg Jets, as a historic season faces an uncertain end.