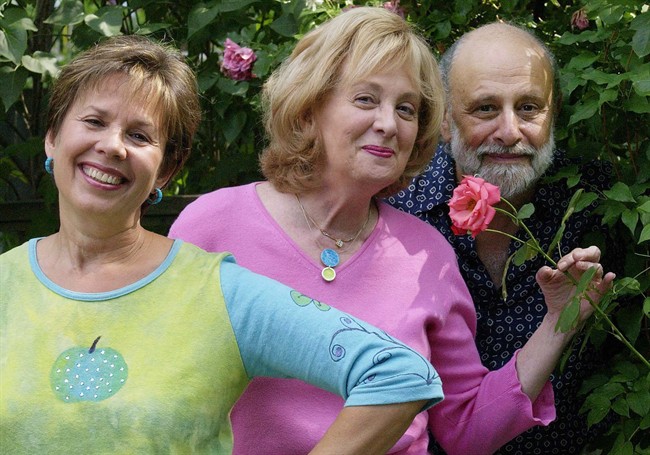 TORONTO – Lois Lilienstein of Sharon, Lois & Bram fame has died. She was 78.

Her son David Lilienstein says she died at home in Toronto surrounded by friends and family.

He says she had a rare form of cancer, which was diagnosed last October.

“She knew it was happening, she was at peace with it, and she died very peacefully and not in pain,” he says. “The care that she received at home through the various providers was stupendous.”

Sharon, Lois & Bram’s beloved series “The Elephant Show” ran from 1984 to 1989 on CBC. It also aired in the United States on Nickelodeon, where it was a consistent ratings draw.

Featuring Sharon, Lois & Bram alongside the tuba-voiced Elephant, the show aired for 65 episodes, each ending with the fan favourite “Skinnamarink.”

In the late ’90s the group returned to the screen with “Skinnamarink TV,” which ran for 52 episodes.

Lilienstein retired in 1998 after the death of her husband, Ernest.

Sharon Hampson and Bram Morrison continued touring after her departure.

The three-time Juno Award-winning trio issued its debut “One Elephant, Deux Elephants” in 1978.

Toronto city councillor Josh Matlow, who got to know the Lilienstein family when he worked to dedicate a Toronto park in Sharon, Lois and Bram’s honour, says he grew up with the group’s music.

“She, along with Bram and Sharon, were part of the magic of our childhoods. Their music played a very special role in so many of our lives. Even today, those of us who are in our 30s and 40s can still sing verbatim the lyrics of ‘Skinnamarink,'” Matlow says.

“Lois dedicated her career to making children the world over so happy by her music. And I think I know that we are all grateful.”